Top > DRAMA > Juliet In The Rain 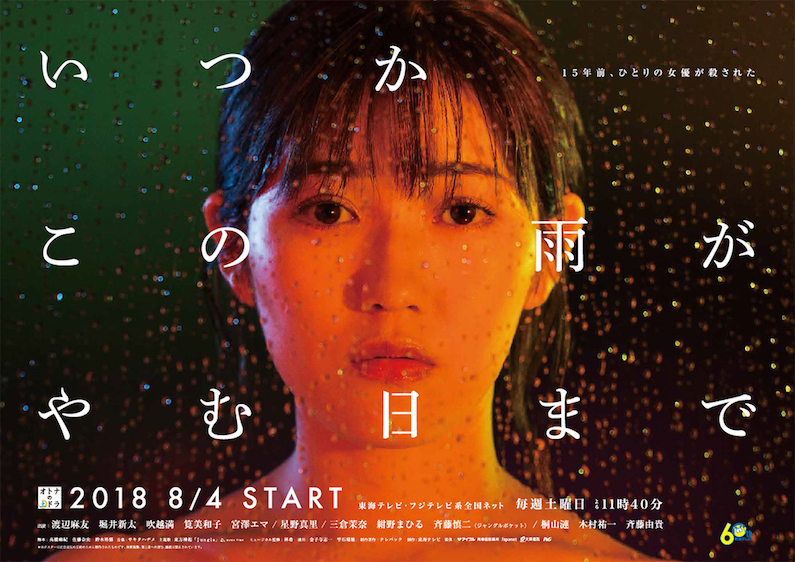 Heroine Hikari's brother had been arrested for the murder that made her give up any happiness. Making a living as a cocktail waitress and supporting her hermit mother, her love to sing and dance remains her one saving grace.

One day, she happens to meet a childhood friend Kazuya who's about to inherit a prestigious restaurant. Living in a totally different world, she snubs him by saying "I'm no longer who I used to be." Her prisoned brother was set free and said he's innocent. Although being unable to believe what he said, she's eager to find the truth. There might be a hope to escape from darkness days. Kazuya empathizes with Hikari's 15 years of pain and trys to help her out. A woman in the darkness finds ray of light, man with success steps down to the darkness. Forbidden love suspense begins in the rain...

The heroine Hikari's brother had been arrested for the murder that made her give up any happiness. Making a living as a cocktail waitress and supporting her hermit mother, her love to sing and dance remains her one saving grace. In the midst of this background, she happens to meet a childhood friend Kazuya out of the blue. Meanwhile, Hikari hears the words of his brother’s proven innocence, after coming out of his jail!

Maiko mysteriously passes away, immediately after Hikari's (Mayu Watanabe) brother Kunihiko met up with her. Whilst the local police are treating the death as an accident, Hitoshi Gouda, the detective who supervised an incident that took place 15 years ago appears to see the causes of her death as something else. Meanwhile, when Hitoshi comes to inform Hikari about the death, he begins to question whether the criminal involved in the case 15 years ago was actually her brother...

Hikari has been able to return to the theatre group with some help from Kazuya. Meanwhile, new evidence reveals that a man had been tagging along with Maiko until hours before her death. Moreover, Hikari becomes shocked at the drawing of the possible suspect handed out by the police, as it looks incredibly similar to her brother, Kunihiko. This in turn begins to affect Hikari mentally as she tries to uncover the complicated situations.

As he promised 15 years ago, Kazuya expresses his desire to protect Hikari (Mayu Watanabe), by stating that they were destined to meet each other. However, Saya Mikami’s feeling of jealousy begins to heat up. Meanwhile, due to words of encouragement from Kazuya, Hikari is able to return to the theatre group. And Mei Tenjiku tells her that the group is where she belongs.

Once again, an accident occurs before Hikari’s (Mayu Watanabe) eyes. During a rehearsal for their stage performance of “Romeo and Juliet,” one of the lighting equipment falls on Mei.
Yet another accident has occurred for the “Umihebi” stage group. These recent run of strange occurrences force Tenjiku Kaname to temporarily withhold their groups activities. While the group members are in a state of shock as a result, Hikari begins to wonder whether her brother Kunihiko might be involved in all of this.

Hikari (Mayu Watanabe) and Kazuya Tanigawa has finally been able to get together. However, a dark hidden truth is gradually getting revealed. Meanwhile, Kunihiko who’s currently hiding in Chihiro’s apartment is shocked when he hears that the father of Asami’s child is Kaname Tenjiku.

Hikari (Mayu Watanabe) is shocked, when Kaname Tenjiku asks her how she would react, if he told her that he was the one who killed Asami. However, she tells him that she still wants to play the role of Juliette if even if what he’s saying is true. Meanwhile, Hikari suddenly gets a call from her mother Yuko, that her brother Kunihiko is unconscious after falling off a bridge.

After the death of Kaname Tenjiku, Hikari (Mayu Watanabe) is now in a state of shock. She now feels anxious about everything she had believed up until now. Furthermore, everyone in the theatre group is in confusion and nobody knows why all of this has happened. Meanwhile, Kunihiko who had been unconscious wakes up.