FUJI TELEVISION
The morning ritual. Open the window and drink coffee.
Some emotion comes to you. “The view of the scenery beyond is more beautiful than usual.” And “the coffee tastes better than before.” Noticing these feelings is truly art. Art is not the scenery or the coffee itself. It is not found in things.
So, what is it about an object that makes it art? It is in our minds. Objects give us a sense of something special. And when it is conveyed to our minds, art takes its form. It is a part of life. An activity.
Anything that turns on the power of imagery in people's minds is art. Just like Television. An object that gives people a chance to draw out images. The emotions that one gets after a switch is pressed may be considered infinite just like forms of art.
Then I turn on the TV. The morning ritual.
These artworks are sold on the art platform supported by Fuji Startup Ventures Inc. Why not open another window? →

This new YouTube channel will widely distribute Fuji Television’s IP to viewers around the world starting with multilanguage subtitle contents. Digest versions of the documentary series “THE NON… 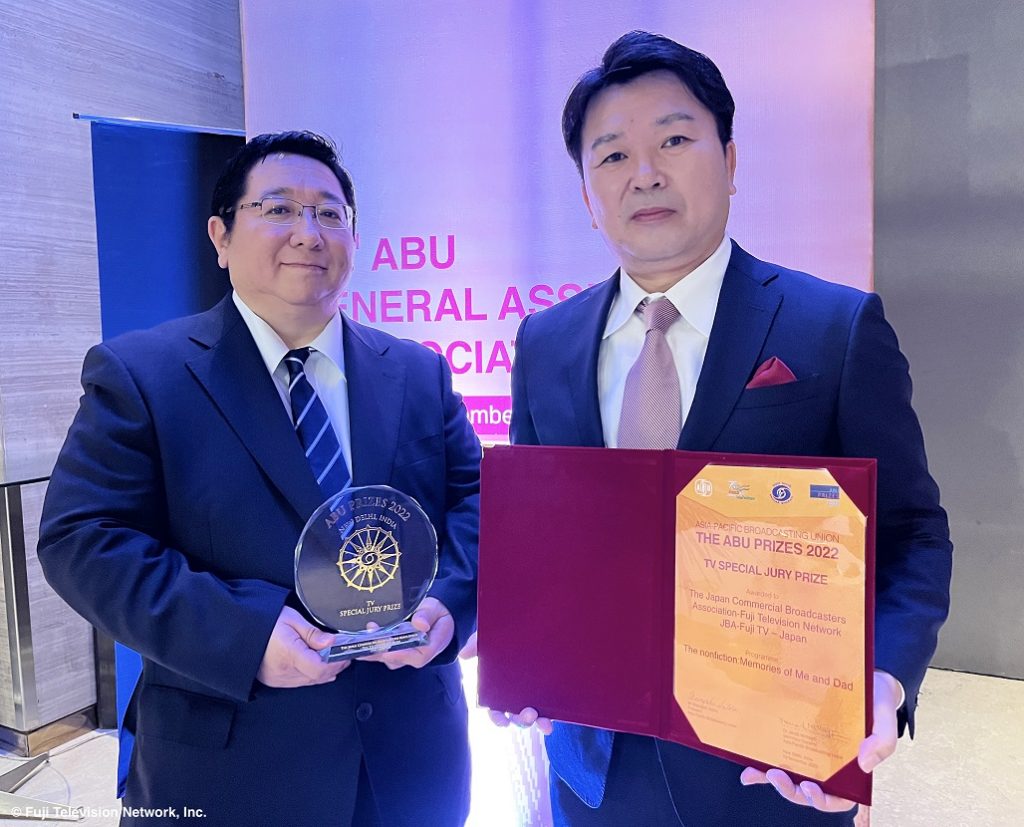 “The Nonfiction: Memories of Me and Dad” Wins Special Jury Prize for the First Time at the Asia-Pacific Region’s Most Prestigious ABU Prizes 2022!

The ABU (Asia-Pacific Broadcasting Union) held its Award Presentation Ceremony in New Delhi, India on Tuesday, November 29, and “The Nonfiction: Memories of Me and Dad” (broadcast October 17, 2021) wo… 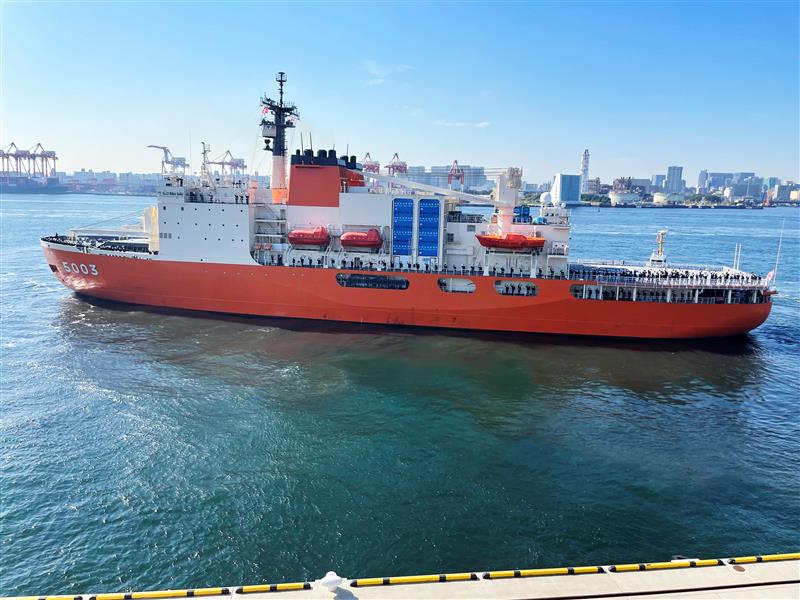 Mt. Fuji is the highest mountain in Japan, towering far above anything else with perfect proportions. For centuries, it has been one of the most loved themes for Japanese poets and painters alike, adored by many of all generations. It truly symbolizes the spirit of Japan.

This is why the company was named after Mt. Fuji. Inside the gigantic ball is the Spherical Observation Room open to the public, which offers a panoramic view of Tokyo and Mt. Fuji on a fine clear day.

So, why not come for a visit? Let’s get the ball rolling. 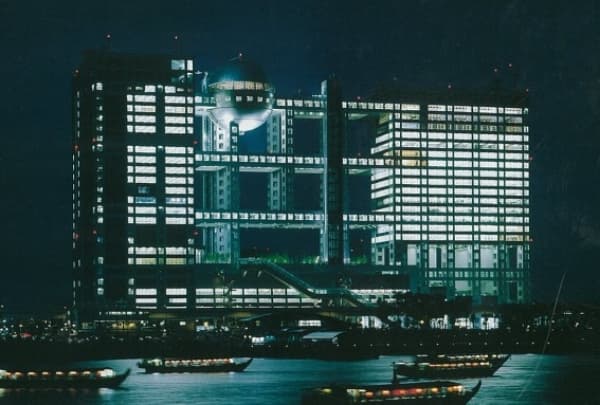 Fuji Television is a content factory established from the ground up to embody creation and imagination in a single space. The architecturally innovative building which towers over the waterfront area blends into the dynamic skyline. More than just a building with a unique design, the headquarters houses a high-profile broadcasting center with an eye set for the future. 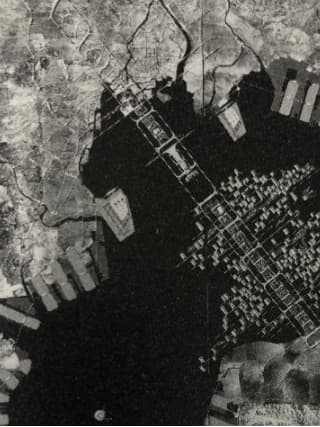 The headquarters building of Fuji Television Network, Inc. was designed by Kenzo Tange. As a highly acclaimed architect who has created many symbolic works such as Yoyogi National Gymnasium, Hiroshima Peace Memorial Park, and Tokyo Metropolitan Government Building, he was the first Japanese to win the Pritzker Architecture Prize, often considered to be the “Nobel Prize for architecture.”

After completing his graduate studies at Tokyo Imperial University, he taught at his alma mater from 1946 to 1974 and presided over the Tange Laboratory. In addition to fostering many outstanding architects, including Takashi Asada, Sachio Otani, Taneo Oki, Koji Kamiya, Fumihiko Maki, Arata Isozaki, Kisho Kurokawa, and Yoshio Taniguchi, he was involved in the education of future generations at the Polytechnic University of Milan, Harvard University, Tsinghua University, and other institutions around the world.

In the 1960s, he proposed "A Plan for Tokyo 1960," which emphasized the need for structural reforms to see the growing city of Tokyo through a system of communication. At that time, he worked on the issue of "space and symbolism" and designed the Yoyogi National Gymnasium (1964) with a suspended structure, which was rare back then. In particular, the "double suspension structure" of the First Gymnasium was unprecedented in the world. It is said that the double suspension structure, with additional cables running from the main cables, represents the pinnacle of modernist structural expressionism (showing structural technology as expression), which began with Le Corbusier's project for the Palace of the Soviets. This was used as a venue for the Tokyo Olympic and Paralympic Games twice, in 1964 and 2021.

Tange believed that "the waterfront subcenter is the place where the concentration of Tokyo can be diffused, and the city could respond to internationalization and information technology." He therefore strongly pursued for the development of the Tokyo Bay area. In the midst of making this development a reality, Tange participated in a competition along with the Fujisankei Communications Group, for the development of the waterfront area, which he won. As a symbol of the entire Tokyo waterfront subcenter, he designed the Fuji Television Headquarters Building (1996), a state-of-the-art media center in the Odaiba area.

He also designed capital city construction plans, urban plans, and campus plans around the world, including oil-producing countries in the Middle East, newly developing countries in Africa, and Singapore.

Even more than an architect, he was very much active as an urban planner. This is the reason why he is called the "The World-Renowned TANGE." 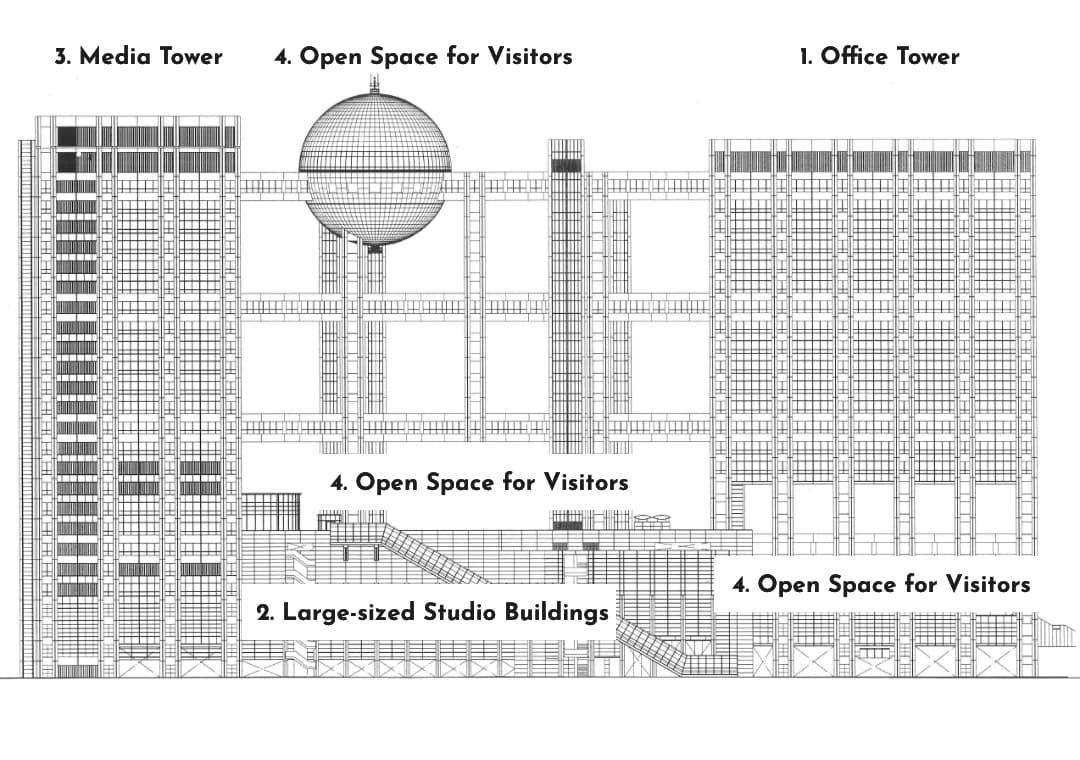 The Headquarters Building:
Its Form is Inevitable

Opened in April 1997, a quarter of a century later, the Fuji Television Headquarters Building is still a symbol of Odaiba, along with the Rainbow Bridge.

The building was required to have different functions in terms of structure: (1) offices, (2) large-sized studios, (3) medium-sized studios and broadcasting facilities, and (4) an open space for visitors.

For an ordinary building, it would be enough to maintain the tower building and surrounding exterior for (1) and (4), but the problem was with (2) and (4). With (2), it has no columns and nothing can be built on top of it due to an open space. In the case of (3), heavy materials must be stacked and layered.

Tange solved this complication with ease. He lined up five large-sized studios (2) horizontally, with (1) an office tower and (3) a media tower at each end, and (2) studios on the lower floors. The result was what we call an uneven, concave building. In addition, the twin towers were connected with a total of six corridors, and a spherical observation deck located at the top. This created a sense of unity, transparency, and fluidity for the complex, making it a multi-functional building.

The basics of the design are said to be ●, ■, and ▲. We often see this in illustrations and paintings, but in architecture, there are many opportunities to avoid anything other than ■. However, Tange has embodied this very principle for the Fuji Television building.

What is noteworthy are the ▲ and ●. The ▲ is the "see-through escalator" (Tube Escalator) that extends in a straight line from the ground level on the first floor to the rooftop garden (Fujisan Terrace) on the seventh floor, and the "Grand Staircase" built in the space under the eaves of the office tower. These were designed with the purpose of creating a diagonal flow of people. 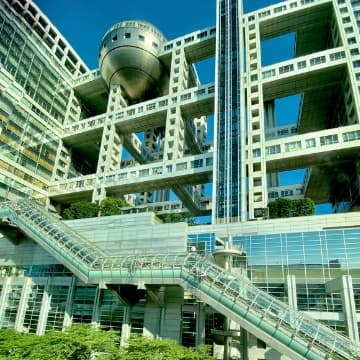 The highlight of the building is the ●. Within the large space between the two towers, a "spherical observation room" 32 meters in diameter, covered with titanium was constructed. This was positioned 100 meters up in the sky! (Due to height regulations, the highest part of the sphere is 123.45m.) This sphere has come to be called the "symbol within a symbol" of this building.

The Structure of the Mast Columns – The Exposed Facade

Tange's focus is on the facade depicting a sense of unity. A facade generally refers to the front design of a building, but in the case of a large complex, it also includes the important elevational surfaces that make up the exterior. It is the face of the building, so to speak, and how it is seen from within the city.

Along with the complex structure of a skyscraper built on reclaimed land, the building is supported by mast columns (in sets of four). As you can see from the diagrammatic elevational view, it is a "facade" that shows the "structure (mast columns)." The surface of the building, which is usually covered with glass curtain walls, are instead aluminum curtain walls, to express both its vertical and horizontal structure. The corridor area has also been designed as a three-dimensional lattice. 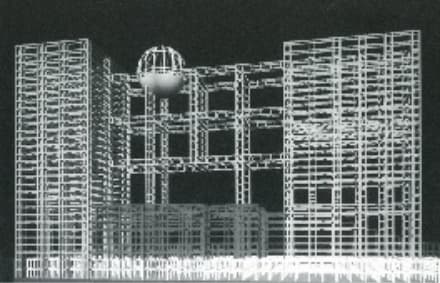 When the company building is viewed from Tokyo Bay, between the asymmetrical twin skyscrapers, are the symbolic sphere, the massive and dynamic structure expressed with the vertical and horizontal mast columns, and the large transparent seeming space. All of this portray a sense of unity and beauty as a single building, despite it being a large-scale multifunctional structure. 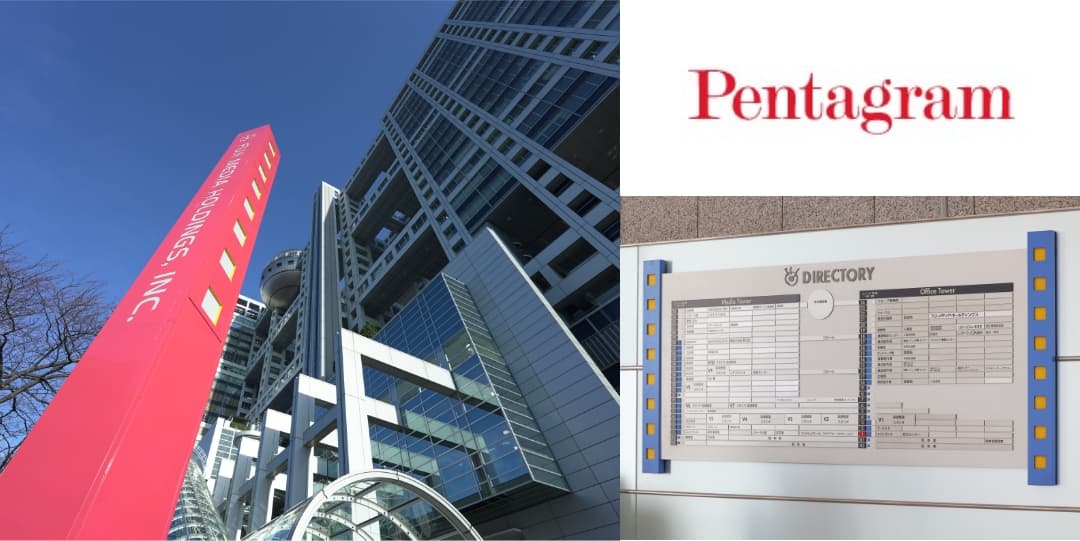 Attention to the “Grid”
- Signage Planning

The expression of the mast columns are also reflected in the signage plan (unified design used for guide signs, etc.) of the company building. The symbolic image of the mast columns have been expressed as bold and condensed "grids," and patterned colors are used both for the exterior and the interior of the building complex. The design company was Pentagram, a long-established company in New York.