Top > MOVIES > TONIGHT, AT THE MOVIES 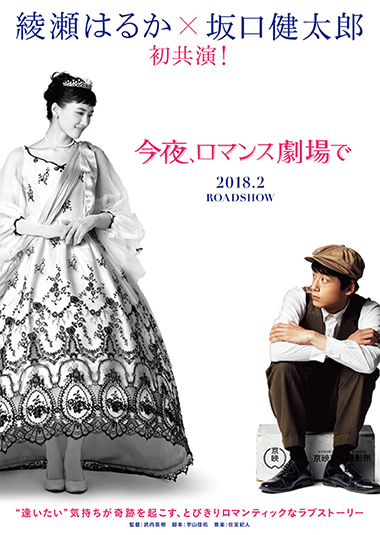 What happens when a B/W movie heroine meets a young man from the real world?
A romantic, heartbreaking love story blossoms…
An aspiring, young director Kenji (Kentaro Sakaguchi) meets a beautiful woman at his favorite movie theater. To his amazement, it’s his matinee idol, Princess Miyuki (Haruka Ayase) who has emerged from the silver screen. Miyuki has only ever known a world of black & white, but with Kenji, she experiences a world full of color. The two begin to fall in love…but the princess hides a secret…
The heroine Miyuki is played by Haruka Ayase, winner of the Best Leading Actress Award at the 39th Japan Academy Awards for her role in “Our Little Sister.” The aspiring director who falls in love with Miyuki is played by Kentaro Sakaguchi, the critically acclaimed actor of “No Longer Heroine” and winner of the Best New Actor Award at the 40th Japan Academy Awards for his role in “Rokuyon Parts I & II.” Bringing the charismatic couple to life on the big screen is Hideki Takeuchi, director of the “NODAME CANTABILE” series and many other hit dramas.
“I want to see you.”
This simple emotion creates a miracle, and a heartbreakingly romantic love story unfolds.

From the production staff of “Thermae Romae”
An original, romantic love story that promises laughter and tears!

1960. Set in a time when movies were still the most popular form of entertainment, “Tonight, At the Movies” is a magical love story of an aspiring director who meets a princess and the girl of his dreams when she jumps off the screen of an old black & white movie.
The kind, young man is caught up in a whirlwind, catering to the whims of the beautiful monochrome princess who is, in fact, quite a tomboy. Gradually, the two are drawn to one another.
“Why did she appear?” As the story unfolds, the destinies of a real life princess whose life was devoid of color and a young man who can love no one else will break your heart. The romantic film is full of laughter, tears, magic and brilliant visual effects. Director Hideki Takeuchi of the “Thermae Romae” (2012, 2014) and “NODAME CANTABILE” (2009, 2010) series is known for his comedic style. The production company Film Makers has produced the artistic “The Great Passage” (2013) and “THE VANCOUVER ASAHI” (2014) as well as mega-blockbusters such as “Thermae Romae.” They now bring you an original, emotional love story unlike the manga adaptations which dominate the screen today.

2017. An old man being treated in a hospital is always clinging to what appears to be a screenplay for a film. When a young nurse, Amane, asks him, “What’s it about?” he bashfully begins to tell the story. “It’s a magical tale of a young man…”
1960. Kenji Makino is an Assistant Director at a film studio. He dreams of one day becoming a director, but all he does now is run errands. Kenji’s outlet and secret pleasure is watching his favorite old romantic movie at the theater -- an old black & white treasure that only showed for a brief period before being cancelled.
But the film’s heroine, a princess named Miyuki, was the love of his life.
One day, the director of the movie calls and says he wants to buy the old reel of film. The owner of the theater agrees to sell it, despite Kenji’s protests.
“This will be the last showing…”
But then something miraculous happens. Following a clap of thunder, the heroine of the movie literally jumps off the screen…in black and white!
She’s breathtakingly beautiful and equally strong-willed, just like Princess Miyuki in the film!
Miyuki is mesmerized by the colorful world she has landed in, but causes nothing but trouble for Kenji. “Why did she appear in this world?” Kenji wonders, while indulging the princess’ every whim. In time, he does fall in love with the real Miyuki, but she is harboring a secret that she cannot reveal…