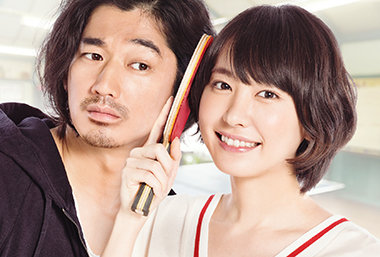 A star-studded gem of a romantic comedy written by Ryota Kosawa of “Legal High” and “Date ~Koi to wa Donna Mono Kashira~?”!! “Mixed Doubles” is the long-awaited new film by internationally acclaimed screenwriter Ryota Kosawa featuring the world of…”table tennis”!
The story of love and rebirth centers on a cast of awkward, flawed characters who pair up as “mixed doubles” to create a small “miracle.”
Co-starring in “Mixed Doubles” is national sweetheart Yui Aragaki, who emerged as a social phenomenon in last year’s TBS drama “Nigeru wa Haji da ga Yaku ni tatsu”(The Full-Time Wife Escapist) and the talented, popular actor Eita who appeared in the blockbuster hits “64-Rokuyon” (2016) and “The Magnificent Nine!” (2016). They are joined by a star-studded cast including Ryoko Hirosue, Koji Seto, Mei Nagano, Tsukasa Saito (Trendy Angel), Yu Aoi, Yoko Maki, Kotaro Yoshida, Katsuhisa Namase, Kenichi Endo, and Fumiyo Kohinata. An entertaining journey that “mixes” humor, emotion and heartbreaking love is coming to you this fall!

Tamako (Yui Aragaki) is 28 and single. As a young “table tennis prodigy”, she was rigorously trained by her relentlessly idealistic mother. After her mother’s death, Tamako was finally free to enjoy her adolescence, find a normal job and live an ordinary life…but somehow, she wins the heart of Ejima (Koji Seto), the hot, new ace of her company’s corporate table tennis club and her life becomes extraordinary! One fateful day, she catches him in the arms of the beautiful new table tennis recruit Airi (Mei Nagano). Devastated, Tamako flees to her hometown, only to find that the Flower Table Tennis Club formerly run by her late mother is in dire financial straits and devoid of the energy and membership it once enjoyed. Its current roster of underwhelming members consists of a bored ex-rebel, now celebrity housewife, a dieting middle-aged couple, a hermit-like high school nerd, and a formerly nationally ranked and injured pro boxer named Hagiwara (Eita) who was abandoned by his family when he mistakenly beat up his wife’s boss thinking they were having an affair…But when Tamako sees her ex, Ejima and his new partner Airi happy paired together, she resolves to enter the members of Flower Table Tennis Club into the National Championships in the mixed doubles category in order to reinvigorate the club and destroy Ejima and Airi. The members are dubious, but begin to train for the tournament. Tamako teams up with Hagiwara, but they’re totally incompatible and fight all the time. Over time, however, their relationship begins to change…
Will the Flower Table Tennis Club members’ dream of entering the National Championships come to fruition? And what will become of “almost-30 and desperate” Tamako and her quest for love??