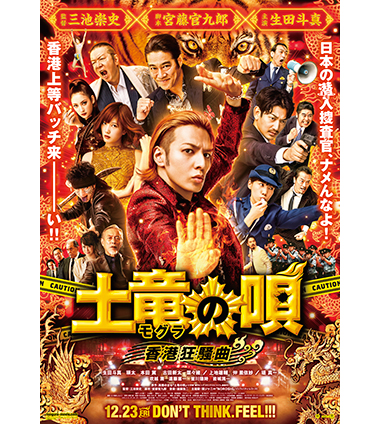 WELCOME BACK TO MOGURA WORLD!!!

This bizarre story begins with Reiji Kikukawa, a patrol cop who graduates with the lowest score in police academy history. Kikukawa is given an assignment to infiltrate the world of organized crime as an undercover cop – a “Mole.” His mission: to restore purity in an increasingly corrupt society. The bestselling manga, “Mogura no Uta” by Noboru Takahashi, serialized in Big Comics Spirits Weekly, reached new heights in 2014 when it was adapted to a live action film directed by the world-renowned Takashi Miike, written by the ingenious storyteller Kankuro Kudo, and starring the multi-talented Toma Ikuta as Reiji Kikukawa. These three renegade talents gave life to the film, “THE MOLE SONG: UNDERCOVER AGENT REIJI.”

Ikuta and the Miike team brilliantly created a new-age hero in Reiji Kikukawa – a seemingly slow-witted virgin, who is in fact, a champion of justice. The outrageous scene featuring a buck-naked Reiji tied onto the hood of a speeding car that ends up running through a car wash shocked both viewers and industry critics. The passionate performances have impressed audiences in Japan, and at the Rome Film Festival in Italy. Ikuta and his co-stars made sparks fly. Riisa Naka played Reiji’s love interest, Junna, a patrol cop who takes his virginity. Yusuke Kamiji portrayed a rogue gangster sporting a full-body leopard tattoo that required eight hours every day on set to apply. Clad in a flashy butterfly-motif suit, Shinichi Tsutsumi played the ultimate “big brother” figure that any man would follow. Veterans Mitsuru Fukikoshi, Kenichi Endo, Sarutoki Minagawa and Koichi Iwaki rounded out the unconventional cast in this ultra-high paced comedy. The movie which opened on February 15, 2014 brought in 2.19 billion yen in box office revenue, and spurred “Mole Fever” amongst viewers in their teens and 20’s. It subsequently aired on Fuji TV’s “Friday Premium” program in January, 2016. Despite some controversial risqué scenes, the show was a huge network television hit, fueling even greater success. But a Mole never rests! In the program finale, Ikuta took viewers by surprise by announcing a sequel! Amidst the excitement, the Mole Project went deep undercover…

…Only to resurface and wreak havoc again in December 2016 with a star-studded cast!

The sequel was adapted from a volume of the original manga entitled, “Chinese Mafia Story” in which our undercover hero, Reiji Kikukawa, takes on an even more impossible mission which climaxes in a showdown in Hong Kong! The movie has it all -- thrills, excitement, action, sex, romance, machismo, justice and laughs! The sky-high intensity of this monster sequel surpasses its predecessor in every way!

Reiji Kikukawa is a flunky patrol cop who is fired one day, and simultaneously given a dangerous mission: to infiltrate a nefarious organized crime ring called Sukiya-kai as an undercover cop, namely, a “Mole.” Miraculously, Reiji manages to elude death multiple times, keep his identity hidden from the yakuza, and lose his virginity in the process! He fails to bring down his target, Shuho Todoroki, chairman of the Sukiya-kai, but is taken under the wing of Sukiya-kai gangster, Masaya Hiura, a.k.a. “Crazy Papillon” and becomes his “brother” in a blood pact – which takes Reiji even deeper into the underworld! But then…an elite and righteous policeman named Shinya Kabuto becomes the new chief of the Anti-Organized Crime Unit with a mission to purify the police force and sever the ties between the police and the yakuza. Reiji, who is now “adopted” by the Sukiya-kai is at the top of his list. Meanwhile, Shuho Todoroki hands Reiji a huge mission of his own! To bring down the evil Chinese mafia group, Senkotsuryu, and serve as the personal bodyguard of Shuho Todoroki and his beautiful virgin daughter, Karen! Reiji is surrounded by dangerous enemies -- from within the police force as well as overseas! And in the background, a dark conspiracy of national proportions threatens to rear its ugly head…

The original manga’s “Chinese Mafia Story” explodes into life in the birth of a new Mole legend!