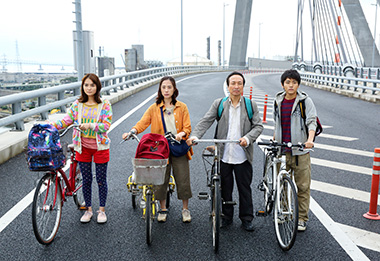 Shinobu Yaguchi, director of countless hits such as “Waterboys,” who stands at the pinnacle of Japanese entertainment movies, begins work on his highly anticipated latest film!

One day, electricity suddenly disappears?!
TVs, refrigerators, smartphones and computers...
Everything requiring electricity comes to a total halt!
With the incomprehensible disappearance of electricity rendering even simple batteries useless, Tokyo is on the verge of falling into ruin, but one family makes their escape! What could possibly await them?!

The father and head of household, Yoshiyuki Suzuki, is played by Fumiyo Kohinata, a veteran of Historical Dramas who played Hideyoshi in “Sanada Maru.” The mother, Mitsue, is played by Eri Fukatsu, who is known for her ability to expertly depict both serious and comedic roles. These iconic Japanese actors team up as husband and wife.
What’s more, Yuki Izumisawa and Wakana Aoi, two of the most recognized young actors, play brother and sister! It’s an irresistible star-studded cast!

The script is also an original creation by Yaguchi. Although depicting a world the likes of which have never been seen before, it’s sure to be full of Yaguchi’s trademark humor! But this work by the famed director doesn’t just go for laughs! In a story full of sudden twists, the intense journey of a family that has lost everything is sure to emotionally move viewers.

When all is switched off, people are switched on.
Everyone who sees the film will remember the importance of family.
It’s the highly relevant latest work by Shinobu Yaguchi,
that conveys the epitome of the 21st century!

One day, a sudden battle for survival begins?!

The Suzukis are an average household living in Tokyo.
Even when the mother tries to make conversation, the father is focused on the TV, the son on listening to music, and the daughter on her smartphone’s SNS. They’re a typical family, together but divided. But one day, the Suzuki household encounters a crisis! When they wake up in the morning, all the electrical appliances have stopped! They assume it’s just their house, but soon find out the outage has occurred everywhere, not just in appliances, but also in trains, cars, gas, and water systems. There are no phones with which to make contact, or trains to ride to work. They think they can get by putting up with it for just one day, until another day passes, and yet another.
What seemed to be a normal power outage is in fact, something much more...
People are stripped of all convenience by the onset of this crisis.
It’s then that the father, Yoshiyuki (Fumiyo Kohinata), makes the decision of a lifetime:
“We’re going to escape from Tokyo!”

Is there a future for the family in this world denied all electricity?! Can a failure of a father protect his family?! The curtain rises on the survival life of the Suzuki household!