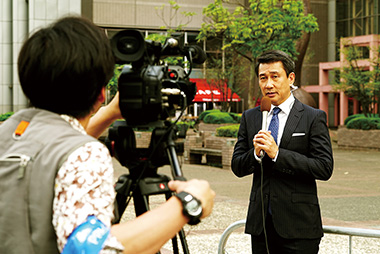 Shingo Sumida is host of the “Good Morning Show”. Formerly a reporter and anchor for a news program, he was forced into retirement due to public outcry after a controversial report he filed at a disaster site, an incident that has left him petrified of in-the-field reporting. His career is saved by a producer friend and colleague, Satoshi Ishiyama, who gets him the morning show gig. On this particular day, Sumida has just left home after arguing with his wife and son at 3 in the morning - his wake up time. In the car to work, he gets a call from his co-host, Keiko Ogawa, who presses him to announce today on air that the two are dating. She mistakenly believes that they are an item. On top of that, Sumida is informed by producer Ishiyama that the program is going to be canceled, with no part in the replacement show. Sumida is crestfallen. Just then, breaking news comes in of a man who has barricaded himself in a Tokyo cafe with weapons and explosives. The Morning Show turns its full attention to covering the incident as it unfolds. To everyone’s surprise, the perpetrator demands that Sumida be sent to him. Sumida, flashing back on the traumatic experience of in-the-field reporting, refuses. But his producer orders him there in compliance with police requests. Plus, it is sure to boost ratings. Sumida heads for the crime site relieved at least that the on-air confession by Keiko has been averted. On site, he is fitted with a camera, mic, and bullet-proof vest, while footage of him going to meet the armed criminal is aired live across the country. Meanwhile, back at the studio, Keiko is in control as the main host in Sumida’s stead in a position where she could say or do anything. But there is a time limit: the end of the program’s time slot. If the armed man isn’t apprehended before the show’s scheduled ending, the bomb will go off. With every second of tension that passes for Sumida, the viewer ratings rise. Nothing like this has ever happened before. A variety show host taking on an armed gunman? With all eyes of the nation on Sumida, he is the news. But will he be able to save the hostages and himself?