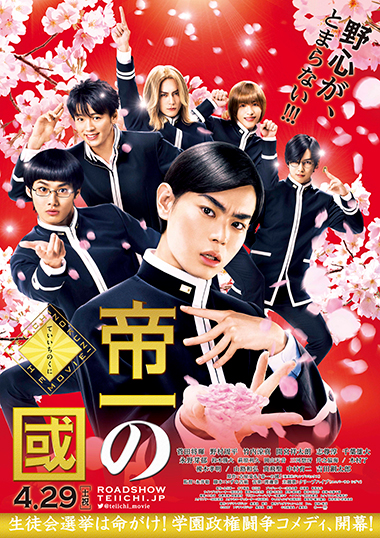 Meet Teiichi Akaba (Masaki Suda) – a high school student who has committed his life to becoming the next student council president!
A cast of hot young actors including Shuhei Nomura, Ryoma Takeuchi, Shotaro Mamiya, Jun Shison and Yudai Chiba present a hilarious story of ambition and political warfare set on a high school campus!
The manga “Teiichi no Kuni” (by Usamaru Furuya) was serialized in Shueisha’s Jump SQ for five years from 2010 ~ 2015.
Captivating fans with its beautiful artwork and unconventional storyline, “Teiichi’s” popularity soared when it was adapted to a theatrical play in 2014. Now it will be adapted to a live-action film with the up-and-coming Masaki Suda in the leading role.
As an avid fan of the original work, Suda said, “Ever since I read the manga, I knew this role was made for me.” Portraying Teiichi’s rivals for the seat of student council president are some of the hottest young actors today, including Shuhei Nomura, Ryoma Takeuchi, Shotaro Mamiya, Jun Shison and Yudai Chiba. They are joined by Mei Nagano and Kotaro Yoshida. Commercial genius Akira Nagai of the blockbuster “Judge!” and “If Cats Disappeared from the World” will direct the film and Yoshihiro Izumi of “ROOKIES” will write the screenplay.
The one-of-a-kind, entertaining comedy “Teiichi no Kuni” is coming to you on Golden Week 2017!

“I’m going to be student council president, no matter what it takes!”
So begins Teiichi’s fight for the ultimate seat of power against 800 brilliant rivals at the most elite private school in Japan…The make-or-break “student council election” begins now!!

The 800 elite students of the top private school in Japan – Kaitei High School – represent the sharpest young minds in the country. Kaitei’s alumni have powerful connections in the political and financial world, and its top student -- the student council president -- is all but promised a future cabinet position. At the beginning of the new school year in April, ambitious freshman Teiich Akaba joins the ranks of Kaitei elites as the top student from his graduating class. His dream is to “become the prime minister and create his own kingdom.” But in order to realize this dream, he absolutely must become student council president.

“I’ll bring down every single rival to become #1…I’ll do whatever it takes, no matter how dirty or underhanded. An effective strategy in my freshman year will give me an edge in the student council elections two years from now. The battle has already begun!”
Teiichi gets a head start on his rivals and takes his first step towards his ambitious goal. But unimaginable conspiracies and challenges await him! Friendships and betrayals abound in the ultimate Battle Royale to outrank each other! The make-or-break “student council election” begins now!!