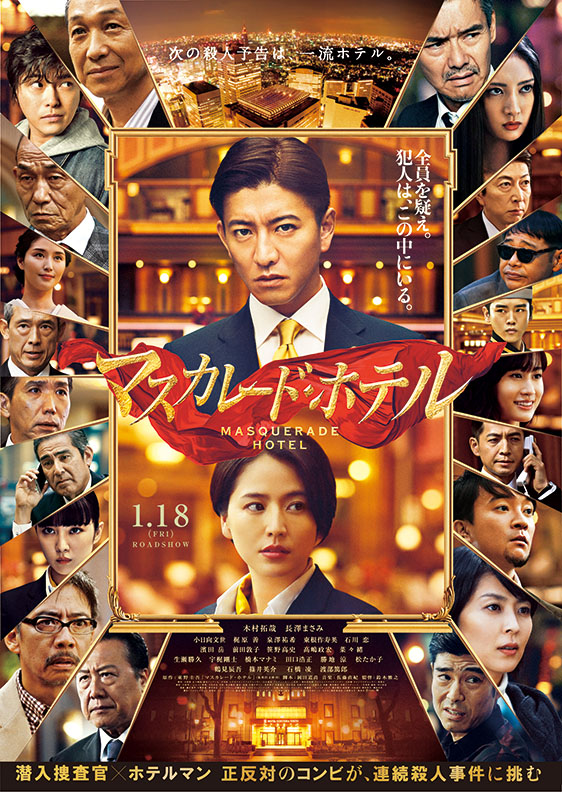 Public prosecutor, prime minister, and genius surgeon are just some of the many roles actor Takuya Kimura has played. Now, for the first time, he takes on the part of a detective! Playing opposite from him in their first-ever match up is actress Masami Nagasawa as a hotel employee who, together with Kimura, is close on the heels of cracking a difficult murder case.
The original novel, “Masquerade Hotel,” was written by Keigo Higashino, and is the first entry in a series that has sold in excess of 2.75 million copies nationwide!
“Masquerade Night,” the latest in the series, was recently published and has in turn garnered much attention.
Following its release, a fierce battle erupted for control of the screen rights, one that took time to secure. Now, after six years, “Masquerade Hotel” is making it to the big screen with Takuya Kimura and Masami Nagasawa, two of the most popular actors in Japan, leading the cast.
The setting for the story is the luxurious Hotel Cortesia located within the heart of Tokyo.
One by one, guests of the hotel come and go as Takuya Kimura, portraying a detective of the Metropolitan Police Department Investigation Division, tries to unveil the “mask” of each guest.
However, trying to protect that “mask” is Masami Nagasawa, who portrays an employee at the hotel’s front desk. They are oil-and-water buddy partners tasked with solving an ultra-lavish murder whodunit.
Takuya Kimura portrays Kosuke Nitta, the film’s main character. An elite member of a criminal investigation squad, Nitta has been led to the Hotel Cortesia by previous clues and goes undercover, posing as a staff member at the hotel’s front desk.
This will be the first time for actor Takuya Kimura to appear in a work by Keigo Higashino.
Assigned to teaching detective Nitta the ropes on working at the front desk is Naomi Yamagishi played by Masami Nagasawa.
Masayuki Suzuki, who helmed the series “HERO,” will serve as director.
Michitaka Okada of the “Liar Game” series will handle the task of scriptwriter.
Utilizing the extremely popular novel of Keigo Higashino’s series that have seen sales of 2.75 million copies, superstar actor Takuya Kimura in his first-ever role as a criminal investigator, and actress Masami Nagasawa co-starring with him for the first time, this lavish mystery is slated for release in 2019!!

Three murders have occurred in the Tokyo area.
Left behind in all of the murders is a series of baffling numbers – a possible hint as to the next crime – that sets off an investigation to uncover the identity of a serial murderer.
Kosuke Nitta (Takuya Kimura) of the Metropolitan Police Department Investigative Division deciphers the numbers and believes the location of the next offense will occur at the Hotel Cortesia in Tokyo. However, there is no clue as to who the culprit could be.
The police decide to investigate from within the Hotel Cortesia and Nitta is assigned to investigate posing as a clerk at its front desk. Selected to train Nitta in the ways of working at the hotel is their first-rate clerk Naomi Yamagishi (Masami Nagasawa). Nitta has focused himself on unveiling the “masks” of the hotel guests and to discover who the killer is. However, Naomi sees her priority to be with that of the guests’ comfort and safety. Simply put, the two are like water and oil.
Butting heads constantly due to their differing opinions, Nitta and Yamagishi forge on with the investigation, eventually discovering each other’s worth as, over time, a trust is built between them.
Meanwhile, the case develops rapidly. The police and the hotel are backed into a corner. Sure enough, the true identity of the culprit of the mystery is none other than…