Top > MOVIES > Fly me to the Saitama 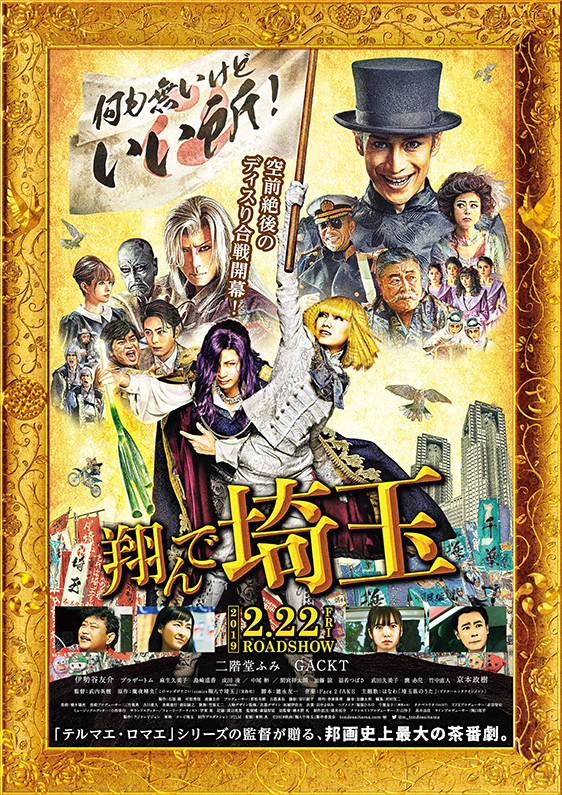 Brace yourself for the biggest farce in Japanese film history!!
The astonishing live-action adaptation of the ultimate “diss Saitama” manga!?
Once upon a time, the people of Saitama Prefecture were severely maltreated by Tokyo-ites. They couldn’t even enter the city without a passport lest they be forcibly expelled. The sensational manga “Tonde Saitama” (still unfinished) which takes dissing Saitama to a new level is coming to the big screen! The original story of the persecution of Saitama-ites by their superior neighbor Tokyo comes to life under the direction of the master of comedy and emotion, Hideki Takeuchi(“Thermae Romae”, “NODAME CANTABILE”). Also making appearances in this spectacle of epic proportions, is Chiba as Saitama’s chief rival prefecture, the detached observer Kanagawa, the unexplored realm of Gunma, Ibaraki, Tochigi and the entire Kanto region. An over-the-top saga of “love and revolution”! Don’t be misled by the “diss Saitama” theme, as this larger-than-life extravaganza is a serious exploration of the theme: “love of one’s roots”!!

A family in a minivan trundles down a farm road, headed for Tokyo.
On the radio, a popular local singer Saitamanzoh croons “Why Saitama?” while the DJ begins to tell a tale – an urban legend – about Saitama…
Once upon a time, the people of Saitama suffered terrible discrimination from the neighboring Metropolis of Tokyo.
Saitamites couldn’t even enter Tokyo without a passport. Those caught without their papers were forcibly expelled. The citizens of Saitama prayed for a savior to appear and free them from persecution.
In an elite private school in Tokyo - Hakuhodo Academy – the Governor’s son and student council president Momomi Dannoura (Fumi Nikaido) sat atop a hierarchical pyramid with the reviled Saitamites at the bottom.
But the arrival of transfer student Rei Asami (GACKT) from the U.S. turned Momomi’s life upside down.
Rei is actually a Saitamite and a key member in the movement to abolish the passport system and free his people from persecution.
When Rei is outed, Momomi decides to abandon his standing and future in society to flee with him.
But their flight is thwarted by the Dannoura family butler Sho Akutsu (Yusuke Iseya), a member on the front lines of the Chiba Liberation Front. Chiba is another oppressed prefecture and Saitama’s historical rival. The Saitama vs. Chiba face-off embroils all manner of prefectures, from Kanagawa to Tochigi to Ibaraki, as Momomi and Rei take on Tokyo with the help of the legendary Saitama Duke (Masaki Kyomoto). What is the fate of Saitama? Of Kanto region? Of Japan?