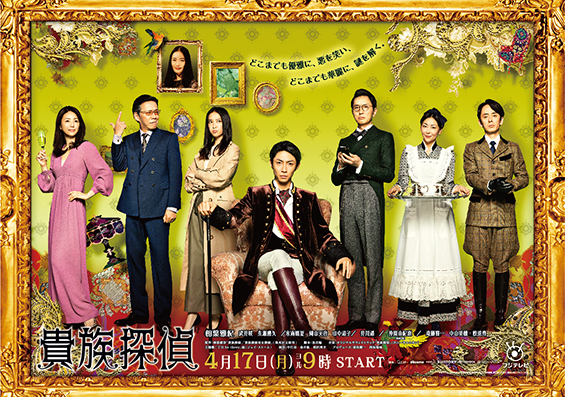 Elegantly dressed, the protagonist of this drama is an aristocrat who dose detective works as a part of his hobby. Nobody knows him really. His age, academic records, family, where he lives and even what his real name is are all wrapped in a mystery. He does not seem to have a job properly. With gentlemanly behavior, he always bears in mind ladies first.
He is a man of dignity who has a strong will as a nobleman and he’ll never be obsessed with power.
He works on top police officials when coming across incidents, and this makes a Police detective Raiu Hanagata get involved to resolve cases together.

“A chore like reasoning is for servants” he says, and enjoys talking to women he meets along cases.
Meanwhile, his extremely loyal servants Yamamoto the butler, Tanaka the maid, and Sato the driver start investigation on crime-scenes instead.

As the 30th anniversary for the iconic popular hour for dramas “Getsu-ku” (Monday 9:00PM), this graceful detective in a mystery will surely spice up the story!