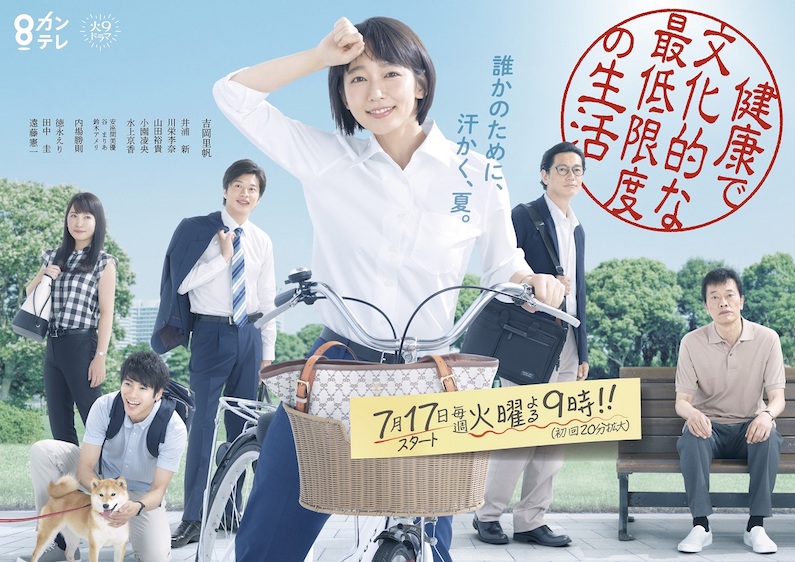 The main character Emiru, gets a job at a ward office, where she immediately gets assigned to the welfare department. Despite becoming a member of the public official for stability, her job involves working and supporting people with financial difficulties, through public subsidies, as a caseworker. By working with many different kinds of people, she gradually tries to become a competent worker despite the hardship of the job itself.

A public official worker Emiru (Riho Yoshioka) begins life in the real world. Despite the hardship of starting her new job at the welfare department, where she supports people with financial difficulties, she gradually weaves her way through the new environment, whilst coming to terms with many hurdles along the way.
After failing to achieve her dreams of becoming a movie director, Emiru (Riho Yoshioka) decides to seek for a more stable job, by becoming a public official. However, she and her co-workers get put in a department which is completely the opposite of what she had first intended. Their job entails working at the forefront of society’s welfare…

Emiru (Riho Yoshioka) has become a caseworker to pursue a stable lifestyle. However, she gets assigned the difficult position of having to supervise 110 households which are in need of financial welfare. Meanwhile, only a few days into her new job, one of her welfare recipients commits suicide, and this in turn puts her into a state of shock.

Emiru (Riho Yoshioka) discovers that one of receivers of financial welfare had been doing so illegally, as a high school student had been secretly working part-time without letting his mother know. Receiving payments without letting the ward office know, surpasses its regulations. Meanwhile, after finding out about this, Emiri tries to uncover ways of lowering the amount of payment for the family.

A single mother all of a sudden comes to the welfare benefit enquiry desk. While raising her 6 year old daughter all by herself, she spends her days eagerly looking for a potential work opportunity. Meanwhile, while Emiru (Riho Yoshioka) is playing with the daughter, while her mother is having a consultation, she begins to realize that the daughter might be experiencing some kind of stress.

A man named Kou Shimaoka comes to visit the welfare department, requesting for financial welfare benefits. Apart from coming out about his depression, he refuses to answer any of the questions thrown at him, as regards to his financial background. Meanwhile, after several discussions amongst the welfare team, Emiru (Riho Yoshioka) is given the responsibility to assess the complex situation.

After numerous attempts to push through the dependents enquiry for one of the financial welfare benefit requesters, Emiru (Riho Yoshioka) is ordered by Daiki to push the enquiry through by whatever means possible. Meanwhile, the requester’s father who is getting worried with his son’s situation comes for a visit with the hope of a compromise?

Despite being a highly proficient caseworker Ms. Kurihashi (Rina Kawaei) occasionally disregards the feelings of those who may not be up to her standard. Therefore, she begins to feel at a loss, whilst working with co-workers such as Emiru (Riho Yoshioka), who is always able to approach her clients in a service oriented mannerism which satisfies them. Meanwhile, Ms. Kurihashi has to supervise a new case which may involve the termination of financial welfare benefit recipient.

Emiru (Riho Yoshioka) receives sudden news, that one of the recipients of financial welfare had been taken into hospital. It has been assumed by doctors, that this is as a result of excessive alcohol consumption, having a negative impact on his pancreas. Despite being in such a terrible situation, the patient is in no way worried about his condition, and has no desire for special treatment. Meanwhile, Emiru becomes awfully concerned about the situation, and tries to rectify things. However, this doesn’t go so smoothly.

Emiru (Riho Yoshioka) receives a call regarding situation at a household where Haruka is currently residing. When Emiru goes to visit the house, it turns out that Haruka’s mother who had left home 4 years ago had returned out of the blue. She tries to convince Haruka that she promises to make things right between them and also that she will look after her.

After a long 4 years, Haruka’s mother has returned. Her mother decides to opt for financial welfare as she feels that she need the money to support her family. However, when she receives the money, she throws her mother into an institution and leaves the house. Haruka, who has now been left alone in the house approaches Emiru (Riho Yoshioka) for some help and advise.