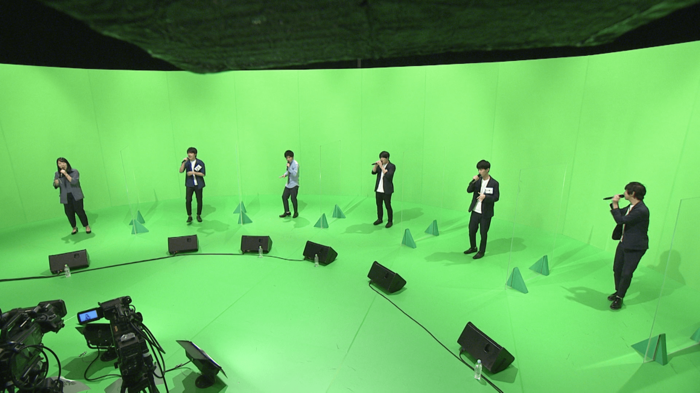 ‘HAMONEP LEAGUE 2020,’ an amateur competition style TV show, which pits student ‘Acapella’ groups against one another was aired as a special on July 4th, 2020. The show was recorded and broadcasted during the period of the ‘Corona Shock,’ which meant that the production team had to work even harder than usual. As a result, it turned out to be a music show which gave strength and courage to many people. We asked the production team for a behind-the-scenes talk about some of the challenging production processes involved.

■In a challenging period when we all must avoid close contact with one another, what were some of the reasons that you decided to go ahead with the ‘HAMONEP LEAGUE 2020’?

Fukiko Kitaguchi (Chief Producer): After we opened the entries for the show’s contestants, the COVID-19 pandemic struck, and we were thinking about what we should do. But during this time, we received an inquiry through the viewer services office. “My child is insisting on appearing on the ‘HAMONEP LEAGUE’ and strongly wants to go out and practice for it. What are your thoughts?” After this, I realized that students were still keen on participating in the competition, and I could sense that they were passionate about it, so we eventually decided to go ahead with it.

Since we believed that the state of emergency would be ending eventually, we extended the entry period for the contestants until the very last minute, and sent out messages on Twitter mentioning that ‘now is not the time’ for students to be gathering.

Also, one of the biggest differences from other programs is that the show’s participants are not celebrities, but ordinary students. We had to think deep and hard about this, and we all worked out various ways to make it work.

And normally, the competition is held all in one day, however, in order to reduce the number of people participating at once, we decided to split it into two different days: the preliminary round and the final. Also, one of the best parts about the show, are the entertaining talks between ‘Neptune’ (popular Japanese comedians who are the show’s MC) and the students, but after considering the risks involved, we decided not to have ‘Neptune’ participate in the preliminary round. This was an incredibly difficult decision to make.

■Were there intentions to take advantage of the ‘power of music’ to deliver a sense of encouragement to the viewers during this period?

Fukiko Kitaguchi: Yes, that’s exactly what we thought, and in fact, since ‘Acapella’ can be performed anywhere, we felt that the timing seemed to fit the situation we were all in. Also, the students who applied for the show love singing from the bottom of their hearts.

Takahiro Ishikawa (Producer): In the videos the applicants sent in, they were singing with face shields, or have been recording them remotely. It was almost as if they were trying to convey to us that they had been practicing whilst considering all the precautionary measures.

Fukiko Kitaguchi: We all knew that they were all so passionate about it all, so while I was in the studio control room on the day of filming, emotions were running high, and it all kind of brought tears to my eyes (laughs).

■The show also featured a few scenes whereby the contestants were singing in front of a green screen used for CG composition. Could you describe some of these filming processes?

Fukiko Kitaguchi: Normally, the stage where the contestants perform, is partly a sense of exciting motivation for many applying for the show, but this time round, we couldn’t have an audience. So, as a last-ditch effort, we had the contestants sing in front of a green screen for CG composition processes. But still, we wanted the contestants to experience the feelings of singing in front of ‘someone else.’ So, after considering all the precautionary measures required, we decided to invite celebrity guests the students’ admire, and had them watch their performance in the studio. We usually have ten guests, but this time we only had four. Even so, we thought that it would be better for the contestants, if there were other guests in the studio also sharing the same excitement as them.

Takahiro Ishikawa: We also placed an acrylic plate between each of the performers, with a fixed camera on the side of the guests. And, we only had a few people on the performing side, with only two directors.

■The show was created whilst making full use of CG composition?

Fukiko Kitaguchi: We put so much time and effort with the ‘CG.’ The directors were like, “let’s make something interesting.” We created it after the recording session and produced it according to each  team’s theme. For example, for the song such as the one from the anime, ‘Demon Slayer: Kimetsu no Yaiba,’ we used a slightly darker CG. We can create various styles and effects. We even had one in which the performers gradually rise from below the stage. Above all, it was a huge advantage for us especially during this period, because this technique allowed us to do it all without the use of sets and lightings we’d normally have to use.

■It was surprising to see some of the teams participating remotely. And they were hitting high scores too!

Fukiko Kitaguchi: Some students couldn’t come to the studio because they weren’t able to get permission from their schools, even though their abilities were tremendous with high expectations. So, we got them to perform remotely.

■Did you use ‘Zoom’ webchat application?

Takahiro Ishikawa:Yes, we used that. They practiced so hard, working on synchronizing the rhythms, and they even chose their own microphone equipment and other kits that sounded good to them. The other teams who performed in the studio also had to practice remotely during the period too.

■An ‘Acappela’ contest which include remote participations by the contestants, maybe a first-time achievement?

Takahiro Ishikawa: Well, maybe that’s the case at this current moment in time…

■Were there any changes in the way your production crew are working now?

Takahiro Ishikawa: What used to take hours of work in the editing room, all began to move forward remotely. As a suggestion by IVS (post production company), we live-streamed the videos for previews to a closed- source, which everyone could access remotely to get the work done. Another thing that has changed is the style we now do our meetings. Up until now, we always had to print out lots of materials or especially in the case of the TV industry, the process of laying out sweets and soft drinks for everyone on the desks have been cut out.

■What are the best aspects of filming remotely?

Takahiro Ishikawa: To be honest, it’s difficult to say (laughs). I really want the contestants to be able to sing in front of an audience, with “Neptune” by our side! With ‘Acappella,’ I think that it is because the performers sing close together, that the sounds are put together well.

Fukiko Kitaguchi: Taizo Harada (MC) from ‘Neptune’ told me at the beginning of the show, that simply having an acrylic sheet between you and the audience makes it difficult for the listeners. He said,  “imagine the challenges and the efforts involved with creating a musical harmony in this kind of set-up.” Also, emotions were running high, as the contestants performed well whilst simultaneously overcoming these kinds of challenges.

■Do you think there are any elements from the new recording styles, that will become established as the ‘new normal’ in the future?

Fukiko Kitaguchi: Of course, we will continue to stick to the right virus prevention measures for future recordings. However, knowing that we cannot let a single person get infected is always tough, and proper countermeasures must be discussed each time. We hope to make use of CG again, but we cannot leave out some of the appealing elements of recording with a visually impressive set too.

■Finally, what was the response like after the show went on-air?

Fukiko Kitaguchi: I had the impression that the students created their own ‘stories’ or music compositions without any pre-planned scripts, and that the viewers responded to it very well. Even after all that practice, there was a group that forgot a part in their lyrics, but afterwards, many viewers requested that they wanted to listen to the successful version, and eventually, the viewing numbers for their YouTube suddenly kicked up.

■So, YouTuber HIKAKIN has a big part to play in all of this?

Fukiko Kitaguchi: Of course. After all, he’s a ‘graduate’ of ‘HAMONEP LEAGUE,’ and he knows and understands the students’ situation better than anyone else. This time round, we couldn’t meet him in person, but when we gave the students some treats sent in from HIKAKIN, everyone got so excited and all the tensions just went away.

■We can really feel the Chief Producer’s passion too.

Fukiko Kitaguchi: There was a period when ‘HAMONEP LEAGUE,’ was not being held. Last year, it came back for the first time in a few years. And, as it was a student-only competition, it was considered as a fresh start, with a sense of going back to the show’s roots.

Also, I’m really into it myself. For example, the song ‘Hakujitsu’ (lit.) by ‘King Gnu’ is a great song to begin with, but recently, I also like listening to the Japanese ‘Enka’ version by the students on my smartphone (laughs).

The production crew’s desire to make the show better, hasn’t changed even during the ‘New Normal.’