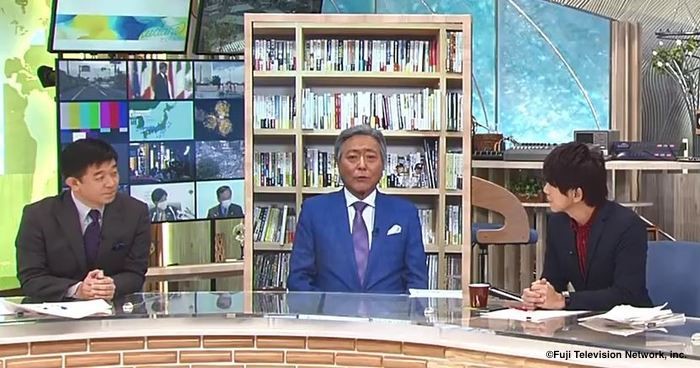 On April 7th, the morning after the state of emergency was declared in Japan, Fuji TV’s popular morning infotainment show “Tokudane!” took measures to ensure that the show’s main MC, Tomoaki Ogura, was able to appear remotely on the show. Everyone was astonished by the natural staging of his remote appearance. And now that we are all gradually beginning to adapt to this new norm, we explore whether the various changes influenced by the “Corona Shock” will take hold as the “New Normal” in the future. We asked producer, Daijiro Hiraoka and Technical Director, Katsunobu Omori, who both took us behind the scenes of the production process.

Conveying his “absence from the studio”

■A state of emergency was declared on April 7th, 2020, and from the following morning’s “Tokudane!” show, MC, Tomoaki Ogura appeared from inside a large vertical monitor screen. This was widely considered a very quick response by the production crew, but what did exactly happen on the frontline?

Daijiro Hiraoka (Producer – “Tokudane!”): In fact, it all started with the process of gradually convincing Mr.Ogura himself. Deep down, it seemed like he preferred to continue appearing from the studio. He felt that it wasn’t right to escape from it all to a safe place, in the midst of the coronavirus situation, when the rest of the production crew and other studio members and guests were all still at risk. The chief producer discussed with him of the plan, and then I moved in to get ready for the actual production format itself. One option was to utilize CG in addition to monitors, but there was inevitably going to be a time delay during the process of synthesizing CG imagery. Since “Tokudane!” is a show in which what Mr. Ogura says, and his interactions with the other studio guests are important, we could not risk this. Moreover, we wanted to present his remote appearance in the studio to make it seem as natural as possible. So, we thought, wouldn’t it be a good idea to put the monitor upright and place it where he usually sits? Then, we tried three monitor sizes which consisted of 70, 60, and 55-inches, and the 70-inch seemed the best fit.

■The switchover was quick as preparations had proceeded in advance?

Daijiro Hiraoka: Yes, even before the state of emergency was declared, we were readily on standby to make sure that we could make the switch whenever it was required. For some programs, they use CG to synthesize set images as a backdrop, however, we on the other hand, wanted to purposely convey a message to the viewers, that he was “not in the studio.” This is why we decided that shooting in front of the bookcase in his study room would be the perfect option. Even though there were a few coincidences, the table in his study room is almost the same height as the one in the studio, and we were also able to make the bookcase and studio set up blend in well. Furthermore, we managed to install a small antenna which can transmit radio waves.

■In terms of the technological aspects, how did you achieve it all?

Katsunobu Omori (Technical Director – “Tokudane!”): As far as the talks are concerned, we had to make it all seem natural, and so the issue of time delays for video feeds was a major point for discussion. The camera takes a full shot in a horizontal position, and rotates it vertically with a converter, but that’s where the time delay first comes in. But, it just takes about 180 milliseconds (1 second = 1,000 milliseconds), and so this is only within 1 second, but we still have to adjust the misalignment between the video images and audio. Also, when we send out the data to the studio, there are several pieces of equipment, such as compressors, and picking and setting out which specific mechanisms will reduce these delays the most was crucial. Vice versa, in order to send back video images and audio from the studio to Mr. Ogura without delay, we used “IP” and internet technology. There are technical ways in which connection over the internet can proceed without causing delays. So, we used all of these as a combination.

■What is the small antenna used to transmit radio waves?

Katsunobu Omori: It’s called FPU or “Field Pickup Unit.” It is a transmitter that uses the frequencies made available through a license received from the Ministry of Internal Affairs and Communications. It is used quite often for on-location relay programs. For broadcasts such as large scale sporting events, two or three relay vans may have to go to the location. But, when you have a live broadcast on a scale such as this, we use it to construct a basic system.

■Other than Mr.Ogura, how did you manage to make other remote appearances for studio guests a reality?

Katsunobu Omori: Of course, there were some guests who used “Skype” from their homes, but from the point of view of preventing the spread of Coronavirus infection, we set up another unmanned “Tokudane!” broadcast location in the front room of the V3 studio. We shared the same equipment with another infotainment show, “Afternoon Live Goody!” through changing the background panels. In doing so, we made it possible for guests to also appear via vertical monitors too. Also, when using the so-called “wipe” display (screen overlay technique), the picture quality is far better if the images are directly displayed on the overlaying wipe screen, but the aspect length-to-width ratio will differ depending on the connection method. So, bearing this in mind, the studio cameraman re-shot the monitor itself to make the wipe displays look more natural on screen.

“Line of sight” rehearsals for a remote broadcast

■Mr.Ogura seemed to have been naturally hosting the show within all of this.

Daijiro Hiraoka: In fact, no one was around Mr.Ogura during the broadcast. So, he spent a lot of time between the broadcasts to think and practice, in order to make it look as if he was in a studio without any awkwardness. For example, he was confirming things like, if announcer, Toshihiro Ito is standing at a particular spot in the studio, which “line of sight” he should be focusing on and in exactly which direction he ought to be facing. Also, viewers even noticed that he had frequently changed the books and accessories that are placed on his bookcase. I think that it was Mr.Ogura’s sense of creativity and playfulness.

■Did you encounter any trouble during the whole process?

Daijiro Hiraoka: We were doing simulation tryouts of what we should do if the line went down. In fact, every day after we did his outfits, we shot a video of him that was almost near to a still image. In the case of a sudden trouble, we had planned about switching to that almost motionless video image and transmit audio over a telephone line. The assumption was that the broadcast would then be able to continue if a mishap had occurred.

Katsunobu Omori: But in fact, we didn’t have any “big” trouble after all. However, the general mood on the set was always tense. If someone had got infected, the people around them would also be considered a “close contact,” and they would be hindered from coming into work for a while. We all took thorough measures to prevent situations like this from occurring during the production of a live TV program such as this.

What is TV Production in the “New Normal” like?

■With all the changes that have occurred during the “Corona Shock,” is it likely that some of these changes will take hold as the so-called “New Normal” in the future?

Daijiro Hiraoka: There are differences of opinion in the way of thinking for remote appearances, even amongst the studio members and guests. However, I think that all of this has helped to lay the basic groundwork for remote style of broadcasting in the future. In the past, we used telephones to talk to specialists on the show, but I think we’re going to see more of an increase in the use of video calls for various situations. Also, as of the production structure, we had divided the team into different floors to avoid the crew having direct contact with one another, and made sure that work was completed over emails and telephones as much as possible until we went on air. To be honest, it was a little stressful at times, but the crew members of the younger generation were like, “it’s faster to use LINE (a chat messenger application) than a phone!” and they were very quick to adapt. I felt that it was all just a matter of getting used to it. Of course, it was harder than usual, but staff members who had experienced the “Great East Japan Earthquake” were saying that it’s nothing compared to back then. Production processes for TV are sure to change as a result of all of this. For us, this is a period of trying out all kinds of techniques and make the most of what we’ve got. But, above all, I really hope the current situation subsides.

Katsunobu Omori: I think that we can’t call monitor reshoots the “New Normal” (laughs), but even with this kind of new method, we have been receiving suggestions from people around the company. For example, one idea was putting a 360-degree camera in the studio to send back realistic video images to members appearing remotely. In fact, the general mindset now within the TV industry has been changing for a while, regarding the adoption of simple relay broadcast technology. I witnessed it at the Rio Olympics, and foreign TV stations were rationally using equipment which takes advantage of internet connections such as “LiveU.” However, in order to ensure that the broadcast go ahead as planned, technicians firstly try these out, by using it for a small segment of a television screen. I think that we are now in a generation, whereby, we can also efficiently reduce costs by increasing the number of equipment we can take advantage of.