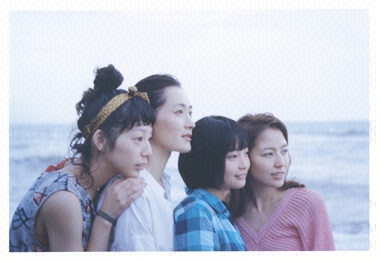 One day, you have a new sister – a half sister whose mother took your father away from the family... KORE-EDA Hirokazu, the young master known for “Like Father, Like Son” (2013) and “Nobody Knows” (2004), brings you another beautiful film that hugs and sinks in your heart through the story of four sisters who start to live together after their father’s death.

Based on the Original Graphic Novel "Umimachi Diary" by Akimi Yoshida published by Shogakukan Inc., the film chronicles four seasons of the sisters in a beautiful sea town Kamakura near Tokyo. By portraying the ripples of life with all the rituals and traditions of the family, the director lets the audience witness the quiet yet turbulent emotional turmoil of these sisters who learn to embrace the world and themselves.

Three sisters – Sachi (29), Yoshino (25) and Chika (21) - live together in an old large house in the city of Kamakura. When their father - absent from the family home for the last 15 years - dies, they travel to the countryside for his funeral, and meet their shy teenage half-sister for the first time. Bonding quickly with the orphaned Suzu (14), they invite her to live with them. Suzu eagerly agrees, and a new life of joyful discovery begins for the four siblings...