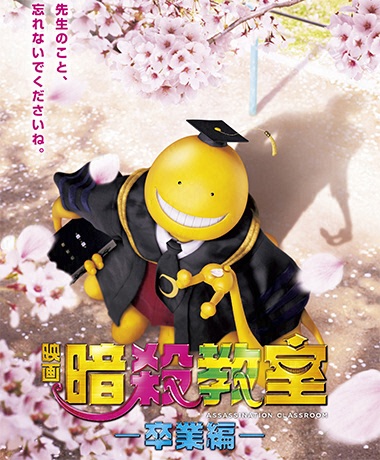 Directed by Eiichiro Hasumi and based on the comic by YUSEI MATSUI“Assassination Classroom” (SHUEISHA / Shonen Jump) “Ansatsu Kyoshitsu” (Assassination Classroom) is a blockbuster manga currently serialized in Shueisha’s “Weekly Shonen Jump” magazine with over 17 million copies in print. No one believed the manga could be adapted to live action, but since its March 2015 premiere, “Assassination Classroom” was ranked the #1 Japanese live action film in the first half of the year and the mysterious, yellow, creepy, octopus-like UT (Un-killable Teacher) has become a national icon. The educational message concealed in the “assassination” theme is both applicable and relevant to real life, and the story of “flunky” kids coming into their own has captured the hearts of young and old alike, creating a whole new genre of entertainment called “educational comedy.”

Graduation season is here! Class 3E’s assassination target is UT (Un-killable Teacher), an unearthly creature that propels itself at Mach 20 speed. The new school year has started and the clock is ticking. Each student must confront his own challenges under relentless pressure, UT’s true identity is revealed and the fate of mankind hangs in the balance. Joining Ryosuke Yamada as returning protagonist Nagisa Shiota is the entire original cast of “Assassination Classroom” including Kazunari Ninomiya as the ultimate assassin Shinigami and Mirei Kiritani as Miss Yukimura, the ex-teacher of Class 3E. Yusei Matsui, who penned the original manga will oversee the creation of the dramatic final season and bring the intensity of the blockbuster manga to the big screen!
The tearful, fateful drama will shock you and delight you in the spring of 2016!