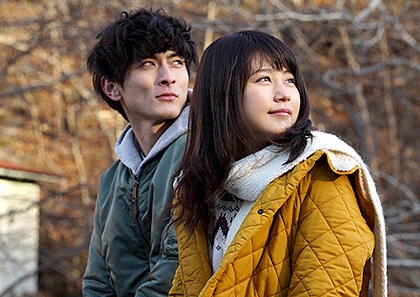 Set to premiere on January 18, 2016, "Love That Makes You Cry" is a wonderfully-written, emotionally-gripping story of love, friendship and growth among six young men and women moving out of their hometown in the countryside to the big bustling city of Tokyo. Kasumi Arimura and Kengo Kora play the leading roles as Oto and Ren. Other cast members include some of today's brightest actors and actresses: Mitsuki Takahata, Takahiro Nishijima, Aoi Morikawa, and Kentaro Sakaguchi. In this interview, we feature comments from the cast about their roles and the production in general, as well as messages to the viewers.

I'm looking forward to seeing how Oto will change as she and Ren's relationship develops. We all know that there are many things in life that are not fair. This story depicts characters facing harsh struggles and unfairness of the reality, yet they remain unwaveringly optimistic. I almost teared up the first time I read the script. I hope that viewers will enjoy the story and discover true joy and happiness that comes from falling in love through watching this drama.

There are many people who feel misfit or outcast, and there are those who give up on their dream even before they start because they believe they don't have what it takes. Hopefully this drama will reach viewers' hearts and evoke their emotions as they see how Oto and Ren constantly strive to make the best of life despite their given situation.

As I see the names of all the cast and the production crew, I'm over-excited with anticipation I can hardly keep myself contained. I'm extremely happy to be a part of this show. I think my character Kihoko is a girl with a fragile, brittle heart and her feelings and emotions all tangled up inside. I'll do my best to bring out her charms and personality through my acting.

This is my first time getting a role in Getsuku (Fuji TV's Monday 9pm time slot) drama, and also considering the fact that I have actually been away from acting for about two years, I feel very humbled by this opportunity, but at the same time I'm super excited! Each character in the story faces their own trials and tribulations. Yet despite all the hardships, they still keep their head held high and try to move forward with their lives. It's perhaps because they're young and full of optimism, but I hope I can also find such inner strength within myself no matter what age I am.

My first reaction when I found out I got a role in this drama was just shocked and surprised. My character Konatsu has a lot of "little sister quality" to her. Hopefully I can be close with everyone like that on the production set as well. The story is going to have plenty of twists and surprises to keep viewers on their toes, so I hope they will enjoy every scene in every episode!

I'm just so happy for this opportunity to play a role in Getsuku drama scripted by the renowned scriptwriter Yuji Sakamoto, so I'm filled with excitement and anticipation. I see my character Haruta as someone who appears as an easy-going, light-hearted guy on the surface, but underneath, he's apathetic towards others and things in general in his life. I think he's the type of character who suppresses his emotions and detaches himself from people and the world, so I'll try my best to express the change of Haruta's heart as the story develops. I want all generations of viewers to enjoy the delight and bittersweetness of love story that this drama offers. I'll dedicate myself fully to deliver a great drama that touches the hearts and minds of all who see it, so please tune in and watch the show!