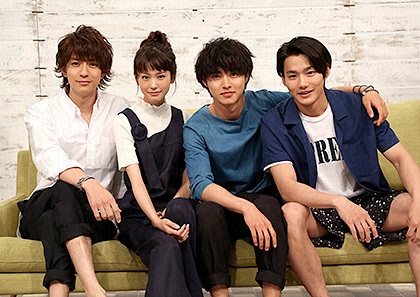 Come July 11, Fuji TV's Monday 9pm drama series will definitely make your summer even hotter! Starring today's top, young actress and actors Mirei Kiritani, Kento Yamazaki, Shohei Miura, and Shuhei Nomura, "A Girl & Three Sweethearts" is a fresh, youthful romantic comedy about a young woman who suddenly becomes housemates with three extremely handsome boys in a charming seaside town. In this interview, we feature comments from the main cast members about their impressions of the upcoming drama as well as their messages to viewers.

What's your first impression of this drama?

Just the title itself sounds so sweet and sparkly, doesn't it? So I think this drama is perfect for the summer season. When you are in love or even just have a crush on someone, you become more attractive, especially girls. I'm looking forward to how Misaki will change as the story progresses.

The story will follow Misaki's point of view, so I hope viewers will find her relatable and connect with her feelings.

What's your first impression of this drama?

Well, it's very simple, but "having someone you like" (*the literal translation of the drama's Japanese title) is the most important thing.

At first, Misaki gets a wrong impression of my character Kanata. But then, she gradually gets to know his real personality and thing starts to change between the two. I hope viewers will enjoy watching how the relationship between Misaki and Kanata will develop over time. Also, I hope that through watching this drama, viewers will feel how wonderful it is to have someone you like and make this the hottest drama of this summer.

Can you tell us how you felt about the drama at first?

Well, I have to say it's got fantastic cast! I mean, the concept of this drama is to try something new, so I think they brought together the cast that can appeal especially to young viewers.

While there are, of course, romantic elements in the story, there's also brotherly love between the three brothers. So this drama is not only about love between romantic partners, but love between family members as well. I hope audience will enjoy watching various types of love within the story.

What was your first impression of this drama?

Although I'm actually older than Kento, I play the youngest brother Toma, which is okay for me because I still act like a kid. *laugh* Shohei, on the other hand, is very mature, and he's like a big brother whom I admire both as an actor and just as a person. So I hope that kind of bond between us can come through.

This is definitely the sweetest, most sentimental and romantic drama of this summer, so I hope viewers will tune in and enjoy watching it.