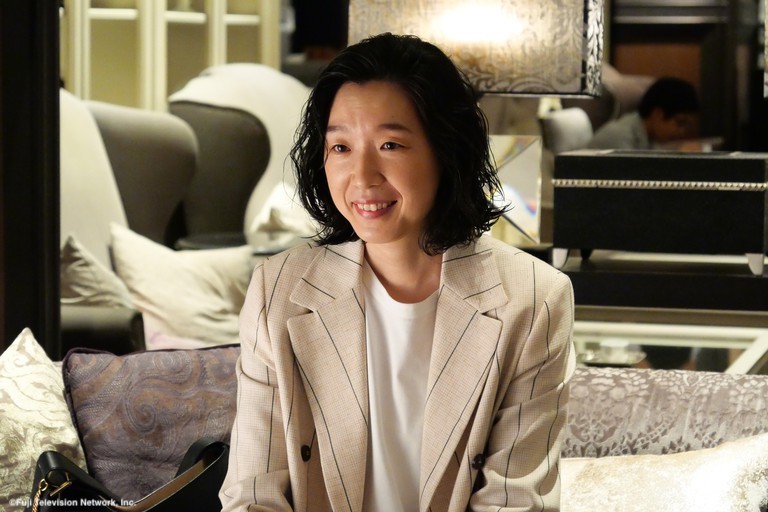 Q: Having participated in the filmings, what do you think is the most enjoyable part about “SUPER RICH”?

The exciting part of this work is that you don't know what the future holds for Mamoru. Since it's an original script, neither I nor the others know about it. There are also several directors this time, and each of them has a slightly different approach on the characters and the story. So, it's exciting to fully immerse yourself within such an on-location environment. I think it's okay for the atmosphere to change each episode. I think that if we tried to stylize in a strange way, the range of the story would become a little restricted. Having said that, even if the director changes, the actors, actresses and their characters remain the same, so it won't be that drastically different. So, I enjoy playing the role, whilst putting myself under the guidance of the directors each time.

Q: How did you prepare for the role of Mamoru?

I'm trying to be conscious of creating a flexible role. There are things that you realize every time you receive a new script. For example, there are times when the character’s role which I’m playing may have been depicted differently in the previous scene and so on (laughs). So, part by part, I'm enjoying acting for each of the scenes.

Q: Mamoru uses the Kansai dialect. What are some of the areas you are conscious about when playing her for this aspect?

The Kansai dialect also differs from region to region, so there are some nuances in the lines written in the script that I’m not familiar with. However, if I were to change all of that into the form of dialect I feel comfortable with, it would make the role of Mamoru seem somewhat strange. So, I try to play the role whilst being conscious of these factors for myself.

Q: What’s your impression of Eiji Akaso who you are working with for the very first time?

He is fun to work and talk with, and a very nice young guy. Whenever I pose him a question, I sometimes get a strange answer which I humorously point out about.

Q: What do you think of the role played by Eiji Akaso?

It feels comfortable acting alongside his character. I just have to listen to what he says. This is because, as an actor, he says his lines from the bottom of his heart. He’s very accustomed to his role, and I think it makes for a fascinating character.

Well, he's not a “puppy” at all, but rather kind of like a bigger dog (laughs). I'm sure his appearance can make them swoon like a puppy. However, if someone really observed him, he’s no way a “puppy” in a good way.

Q: And your take on the role played by Keita Machida who may be seen as a “loyal dog”?

Compared to a dog again? (laughs) He’s really calm and sincere, almost like a “samurai.” He seems very dignified. However, when we are acting together, I wonder if there is kind of a stubborn side to him too. However, he doesn't force it on others, but solves it within himself, which makes him very attractive.

Q: Arata Furuta and Nanako Matsushima are also in the series.

I feel happy every time, knowing that Arata Furuta will “be coming on set.” We were all talking about whether anyone has ever seen a “UFO.” Mr. Furuta said, “I don't believe in anything I haven't seen” (laughs). Nanako Matsushima is a very kind person who takes care of everyone, so that we can work comfortably. She also seems very open-minded.

Q: And lastly, a message for the viewers?

From the very first episode, Mamoru begins to meet new characters along the way. As the episodes progress, we begin to see new sides to Mamoru, and I feel that her enjoyment outside of work is expanding through her encounters with new people. The first episode is a bit serious with the image of a “working woman,” but from the second and third episodes, you can begin to sense an atmosphere of humor too. Hope everyone continues to enjoy the series.