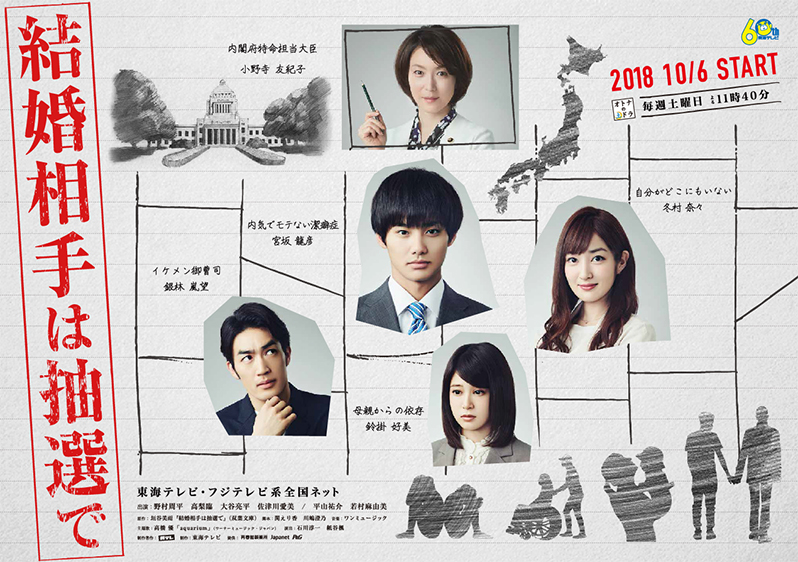 What will you do, if the government of your country chose your marriage partner!!? This is a drama which asks the viewers the question, “What getting marriage is all about?”

Considering the continuous drop of the birthrate, the Japanese government has decided to enact the “Marriage Lottery Act.” Under this law, people aged 25 to 39 who are single and have no children have to get married to the people whom the government selects.

Tatsuhiko, is a single 26 year old, who is subject to this law. He has always been finding a difficulty getting a girlfriend due to his inability to trust people around him and also because he is a clean freak.

On the other hand, a woman who comes from a good and wealthy family called Nana, is also subject to the law, because she broke up with her boyfriend right before the law was enacted.

The two of them, who would’ve never met if the law didn’t exist, eventually take part in a marriage interview.

What kind of relationship will the two destined characters move into, amidst a society which has changed so suddenly!? This is a challenging social drama which also poses the viewers the question about the right definition of marriage and family, in this modern society.

Tatsuhiko (Shuhei Nomura) works at a computer software company. He has been finding difficulty finding a girlfriend due to his inability to trust people around him and also due to his obsession with cleanliness. One day, he gets caught up in a whirlwind of a new “Marriage Lottery Act” imposed upon by the government which forcibly chooses the marriage partner of its citizens.

After many speculations, it has been revealed that one of the government ministers, Yukiko Onodera had been responsible for passing through the “Marriage Lottery Act.” Meanwhile, Tatsuhiko (Shuhei Nomura) realizes that he has the opportunity of putting down one single request for his potential marriage partner, for which he begins to struggle with.

Having experienced two marriage interviews, Tatsuhiko (Shuhei Nomura) decides to start a daily blog in which he discusses about the “Marriage Lottery Act.” When he questions the integrity of the act, he receives a message from one of the readers of his blog, who happens to be a free journalist. Meanwhile, after hearing negative stories from his co-workers who have quickly gotten married as a result of the new law, he begins to realize the chaos which the new act is gradually causing.

Despite his forth marriage date opportunity, Tatsuhiko (Shuhei Nomura) is despondent, after he gets rejected due to his obsession with cleanliness.
Meanwhile, Yukiko Onodera decides to pass a new law, which states that if anyone under the “Marriage Lottery Act” is able to find a partner on their own, they will be exempt from the law.

Tatsuhiko’s (Shuhei Nomura) fifth marriage date turns out to be Nana.
Right from the beginning of the date, her high maintenance aura begins to intimidate Tastuhiko, until he eventually tells her that she’s out of her league and that she should reject him. However, his negative attitude in turn makes her interested as they decide to meet up for a second date. Meanwhile, after the date, Tatsuhiko decides to talk about his current situation with his friends.

After discovering about his close friend’s sexuality, Tatsuhiko (Shuhei Nomura) decides to learn more about the general background. Meanwhile, all of this has been to reexamine the current “Marriage Lottery Act” in order to produce a report form for its renewal.

Tatsuhiko (Shuhei Nomura) calls up the “Marriage Lottery Act” administration office, after being asked by Nana to put in a request to terminate the marriage interview. Meanwhile, Hikari begins to focus more on pushing forward for the renewal of the marriage lottery act.

A year has now passed since the “Marriage Lottery Act” was enacted. In the midst of this, Tatsuhiko’s (Shuhei Nomura) “A S B E” group begins to draw the attention of the media. Meanwhile, Tatsuhiko gathers up some of the negative opinions thrown against the act as he begins to take his ultimate step forward towards achieving his intentions.