Top > VIDEO > NOT QUITE DEAD YET 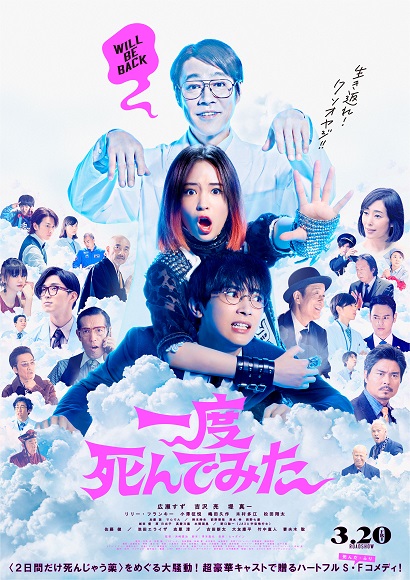 Angst-ridden college student, Nanase Nobata (Suzu Hirose), lives with her father, Hakaru, president of the Nobata Pharmaceutical Company, resentful of his constant nagging about her life, and for being so absorbed in his work that he failed to be at her mother’s deathbed. Exhorting him daily to “Drop dead (once)!”, Hakaru finally does drop dead one day while developing a revolutionary “reverse aging” drug. Hakaru’s team had accidentally discovered a drug that causes temporary death, followed by full recovery in 2 days. Hakaru had been persuaded to take the drug in an attempt to expose a corporate spy planted in his company by a rival firm looking to merge with Nobata and capitalize on the anti-aging formula. When Hakaru drops dead, it sets the company in an uproar as his will names Nanase as the new president. A bewildered and distraught Nanase had no inkling of her father’s death, but can see his ghost hanging around watching. She soon learns the truth about her father’s condition and the spy from Matsuoka (Ryo Yoshizawa), a young employee so unremarkably invisible to others that he’s nicknamed “Ghost.” Together with “Ghost Matsuoka” and the actual ghost of Hakaru, Nanase endeavors to prevent her father’s enemies from prematurely cremating his body before the drug can wear off and allow him to revive.