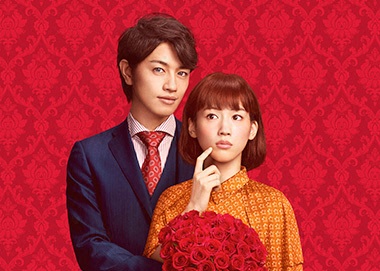 The film adaptation of a bestselling manga voted #1 on the “50 Top Manga Series Poised to Make a Big Break!” list by booksellers representing 3,000 bookstores across Japan!

Kie Hirano (Haruka Ayase) is an awkward, inarticulate working girl who escapes from reality by retreating into her own “fantasy” world. One day, Mitsumasa Kodai (Takumi Saito), a handsome businessman from the elite Kodai family, transfers to Kie’s office. The two are worlds apart -- yet Mitsumasa finds himself drawn to Kie because... Mitsumasa has the power of “telepathy” and can read people’s minds. Mitsumasa’s strange power causes him to recoil from human relationships, but he finds Kie’s outlandish fantasies pure and somehow comforting. Their relationship blossoms, but the legendary Kodai family name poses challenges. Mitsumasa’s mother, for one, believes their love is totally mismatched. To complicate matters, Mitsumasa’s “telepathy” begins to affect their relationship...