Top > MOVIES > Hit Me Anyone One More Time 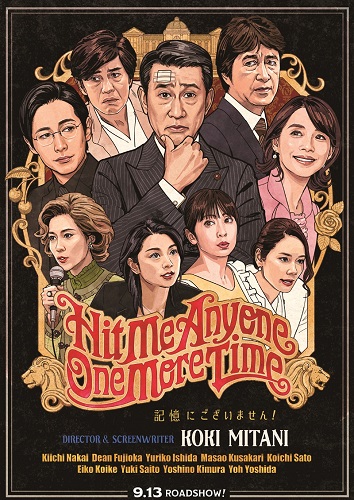 An all-new film by the popular screenwriter, producer and film director Koki Mitani, master of laughter and emotion. His 8th full length feature film is set in the world of politics!

Prime Minister Keisuke Kuroda is widely despised by his people and his approval ratings are the lowest in the history of Japan. One day while delivering a speech, a rock is hurled at him and knocks him unconscious. When he comes to the next day, his memory is lost and he is transformed from a ruthless, money and power-hungry politician to a simple, honest and very ordinary “old guy.” To avoid a national crisis, his mental state is kept secret from the people, his cabinet and even his family. With the help of his inner cadre –his private secretaries – Keisuke somehow manages to keep the government running.

Eventually, he is liberated of all restraints and confronts the needs of Japan with a newfound earnestness and a true desire to change the nation… Playing Prime Minister Keisuke Kuroda is Kiichi Nakai, a trusted actor who has been featured in many of Director Mitani’s films. The Prime Minister’s loyal secretary Isaka is played by Dean Fujioka in his first Mitani film.

A man wakes up in a hospital bed with no idea where he is. His memory is lost. He sneaks out of the hospital, then sees himself on the TV news. The prime minister of Japan was rushed to the hospital when a rock knocked him out in the middle of a speech. He is, in fact, the most powerful man in Japan. He is so reviled by his citizens that one of them actually knocked him out with a rock! A subordinate takes him to the prime minister’s residence. “You are the 127th Prime Minister of Japan. The people hate you and call you the worst prime minister in the history of our country. No one must find out that you have amnesia. It must be kept top secret. We are the only ones who will know.” Only three private secretaries know the truth. He doesn’t know the names or faces of any of his cabinet members, the location of the main conference room of the Diet or his own son’s name let alone the policies he was advancing. He is blackmailed by a freelance tabloid journalist who claims to know of his condition and approached by a mistress who he doesn’t even recall. It seems his wife is cheating on him and his son is heading down a dark path. To top it all off, the president of the United States is scheduled to visit! An amnesiac with nothing to lose regains his ideals and dreams, dragging foreign dignitaries, political rivals, private staff, the press, his family and the entire nation along with him! What fate awaits…?