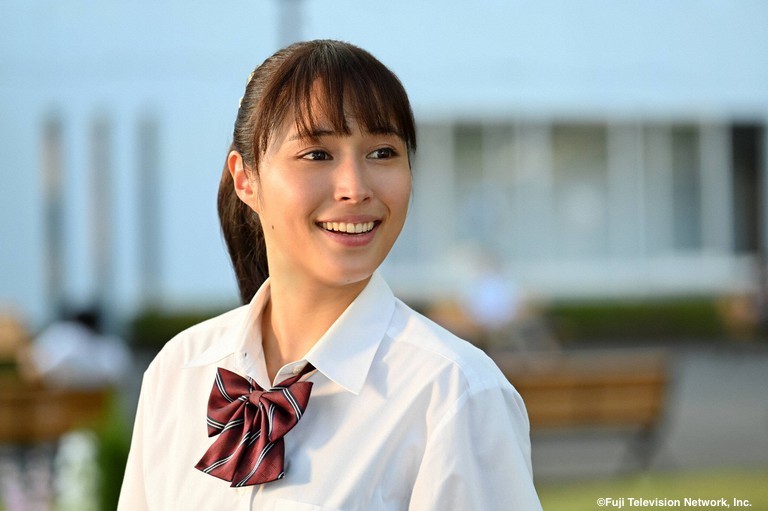 Q: How did you originally plan to play the role of Mio?

I’ve had roles where I have children at a young age, but this was my first time to play a housewife with children. I wondered if I had reached that kind of age. When I read the script for the first episode, I found it to be more epic and realistic than I had expected, and I was looking forward to acting to the fullest.

Q: How was it like filming for a mother’s role?

When the child actor was crying and we couldn’t proceed with filming, we tried calming down the kid etc. Since if you don’t communicate well with them, they may not listen to you as we hope. By interacting with the children well, I realized that we could act through words that came out naturally. You can actually see these kinds of things working in the drama. In my case, I only had to care for the children during the shoot, but if you think about it, this is an everyday case for actual mothers. I realized how amazing mothers are because they have to do all the housework as well on top of this. There was a scene when we had to put children on both the front and the back of a bicycle, and it was really scary.

Q: Did you have any difficulties in playing the role of Mio, the scary wife?

After reading the script, I realized that Mio was not angry in a simple way. When I watched the original Korean drama, I had the impression that the character of Mio was shouting, almost in a crazy voice, so I wanted to make it as close to it as possible. I thought about the speed and tone of my lines, and we confirmed this both in the rehearsals and in actual shoots. I wanted to leave a big impact on the viewers, so I yelled as much as I could.(laughs)

Q: So, what about Tadayoshi Okura?

I myself don’t usually get angry with people very often because I get tired from it. But what I disliked most about Motoharu’s character, is his attitude of not listening to others. If it was myself, I would try to keep my calm and be reserved about it as much as I could for dealing with these kinds of situations. I’m more of the type not to get angry quickly, but rather in a way of cornering someone gradually. So maybe making an enemy of me might be scary in that sense. (laughs)

Q: What did you think of Motoharu, who is married to Mio in the first episode?

I thought that he was no good. I think it would be hard for a woman to be in a relationship with a man like Motoharu. I want him to fix his attitude that he’s childish and has a narrow perspective for everything.

Q: What about the relationship between Mio and Motoharu which begins to break down?

Why don’t they just tell each other how they are feeling in words? If you don’t say it properly, I don’t think the other will ever understand. Like “Thank you,” “I'm sorry,” and even “I want you to do this,” all needs to be said in words. Through this drama, I felt that this is true not only for married couples, but for all human relationships in general.

Q: Mio did not have a bad relationship with Motoharu from the beginning. How was it for you to play another Mio who heads in a different direction?

Well whilst playing the ‘married’ Mio and her in the single days, it didn't feel like I was playing the same person. Firstly, Mio, who married Motoharu and becomes a mother. And Mio, when she was a student and starts dating. And, also her in the single days. I thought that maybe I didn’t have to act as the same person. I felt like I was playing different characters. Moreover, the different costumes and make-up also changed my mood, so I was able to switch among the roles for these aspects. In contrast, the image of Motoharu was always the same for me.

Q: How was it playing the role with Tadayoshi Okura?

The shooting schedule was quite hard, so we were filming every day whilst encouraging one another. I'm not sure if we talked a lot, but considering the relationship between the roles, we had a good distance between one another for the shoots, so it made it all comfortable for us. In and between the shootings, we respectively spent the time playing games and listening to music. And not only him and I, but also most of the other co-stars were at their own pace, so we seemed to have been enjoying our free time individually when we were not shooting.

Q: What did you think about marriage when you played the role of Mio?

I thought I was still good to go on my own.(laughs) Mio seems to be having a hard time, so I might want to enjoy my own time a little more. But it must be also fun to have a family with kids! It would be cute to have my children’s plates on a dining table. (laughs)

Q: Motoharu tries to change the present by slipping back in time to the past. What if you could do the same?

I want to go back to my student lifestyle once more. When I was in the third year of junior high school, I had to go to Tokyo a lot for work. It was hard for me to enjoy the normal things like buying snacks to eat with my friends after school etc. In addition, I don't have many pictures of my own in my graduation album either. When I was in one of the sports classes, there was a photographer who took pictures of us for the album. Though I was luckily there at the time, I had to borrow my friend’s sportswear with her name on it, as I hadn’t been able to attend school regularly due to my work. I was embarrassed to see that photo in my album, which is one of my memories from the school days. (laughs)

Q: Finally, do you have a message for our viewers?

“Familiar Wife” is a fantasy love story, but it depicts the realities of marital relationships. Also, as the story delves into the background of each of the characters, I think this work will make you think about human relationships, through the depiction of not only the marital relationship between Motoharu and Mio, but also the lives of the people around them, their parents, friends, and colleagues. If you’re watching it, you might even want to cheer Motoharu on! So, I also hope you enjoy him being played by Tadayoshi Okura!