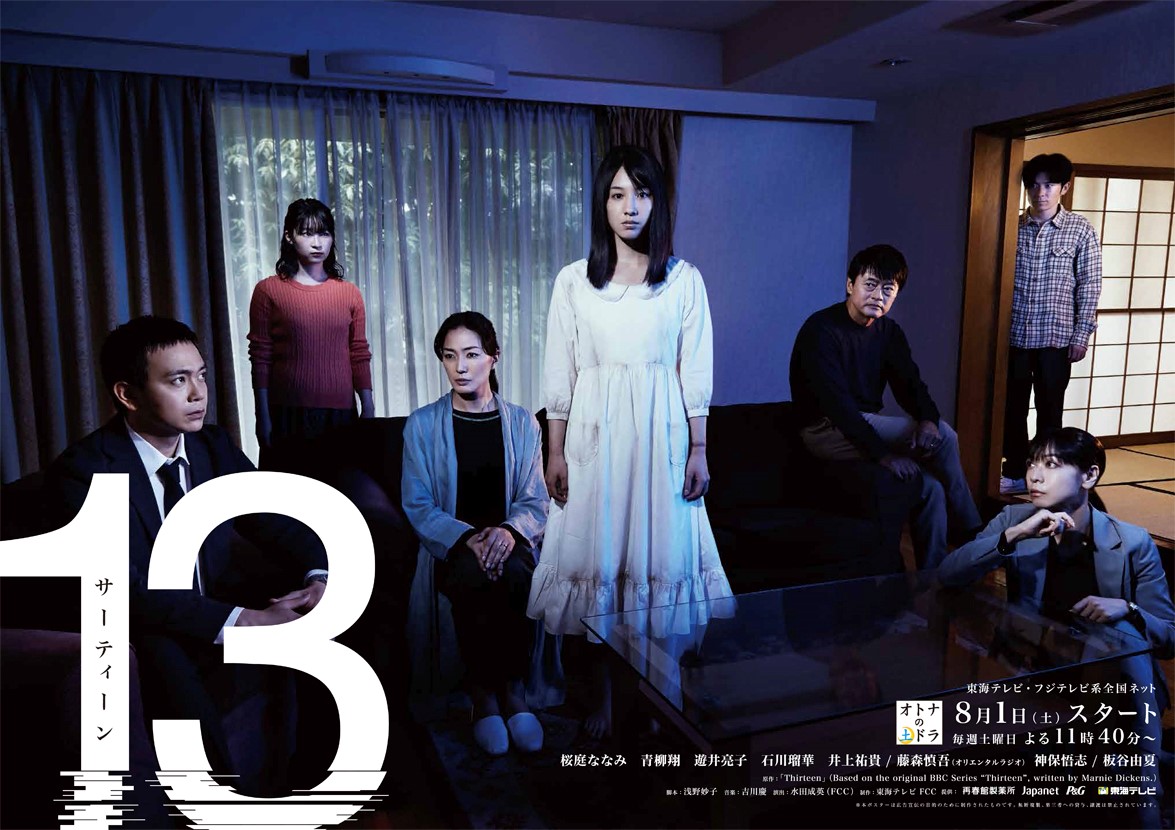 The sensational BBC drama “Thirteen” collaborates with Tokai TV to be adapted into a Japanese drama series.
A shocking crime suspense, which portrays people swinging between chained cases and the absurd reality!

A girl, Yuria, went missing when she was 13 years old. Thirteen years later, Yuria suddenly returns to her family, only to see the world that awaits her has completely changed. The family had been torn apart.... The girl's return changes the fate of everyone. She looks 26 years old, but mentally seems to be a 13 years old... For thirteen years, Yuria’s elusive behavior toys with people and messes up their fate. A mother had been torn between regret over the loss of her daughter and belief in her survival. Behind the joy of her daughter's return, she is forced to confront the past she has been hiding from. As the father and sister also act as a close family member to help Yuria recover her heart, they start to question each of their own steps over the past 13 years. Yuria tells the police that she was kidnapped. What had happened in the 13 years? The detectives in charge of the investigation are troubled as they doubt Yuria's statement. This is because Yuria's testimony at the interview is back and forth and contradictory. Then, a second incident occurs! Additionally, the truth that Yuria had been hiding is revealed. And what is the hidden truth that her family has been holding back…? The original series, BBC's “Thirteen/13 Kidnap Case Files” was a huge hit, as it had been requested to be viewed by 7.95 million people in the UK (A proportion of one out of eight people of the UK population). A popular drama that became a hot topic of conversation when the first episode also topped the charts on the missed-program webcast service, beating all of the BBC's shows. This show carefully portrays a woman caught up in an unfortunate incident who experiences a disconnection from society, the difficulty to even interact with the person she loves, the inexcusable nature of the situation, and the resentment towards the suspect. In 2020, a wave of a top-notch entertainment with suspenseful action of the heroine is coming to Japan!

“13 – Thirteen -” The Japanese version retains the suspenseful elements of the original story, but also includes the story of each family member. Will Yuria's return after 13 years bring about the rebirth of her family, or destroy them? Lost time and lost family bond. What does a young girl find when she returns after thirteen years?

A girl called Yuria, went missing when she was 13 years old. Thirteen years later, she suddenly returns to her family, only to see the world that awaits her has completely changed. The family had been torn apart....

An eight-year-old girl is kidnapped in the neighboring town where Yuria lives. While reviewing the video footage from a surveillance camera, Yuria realizes that the guy’s name is “Kazuki”…