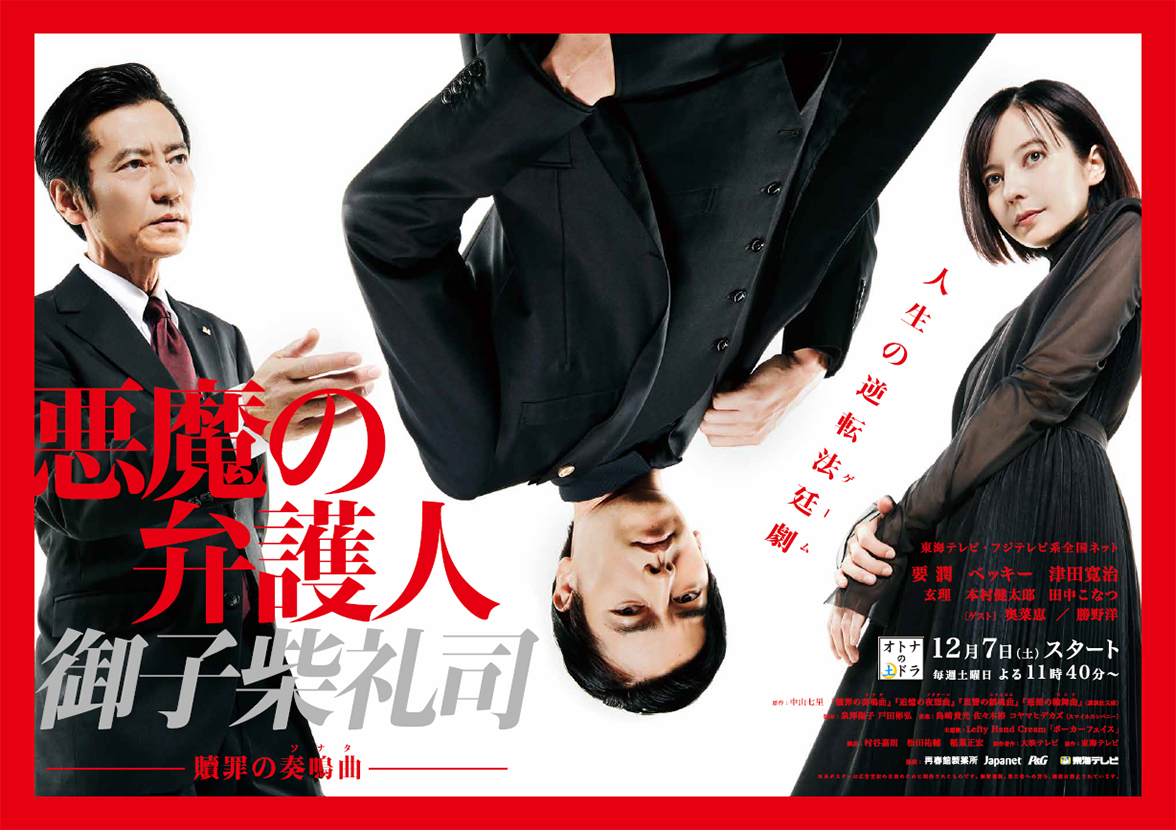 Laid off from her temp job, Yoko Kusakabe is now unemployed. She’s introduced to a clerical position through a public employment agency, so she arrives at the doorstep of a law firm for her interview. But when she arrives, she hears classical music coming from inside. And the office’s sign is cracked, too.

Despite how suspicious she feels, she opens the door. And there, sitting quietly, is Reiji Mikoshiba, the head of the law firm. “Right on time. You’re hired.”
Yoko—who has no idea what is happening—finds herself hired as an office worker for the Mikoshiba Law Firm. But this place is the law firm of the corrupt lawyer known as “the lawyer in hell”.

Then, one day, Mikoshiba gains interest in “the Setagaya Husband Murder”. The defendant is Akiko Tsuda, your run-of-the-mill tired housewife. Falling in love with her boss at her part-time job, she dreamed of leaving her husband and daughter to marry him — thus stabbing her husband to death.

The victim’s father, who lives in the neighborhood, happened to visit and discover the incident. Based on how the corpse was laid on a blue tarp, the court judged that the defendant planned to cover up the incident. She was given a heavy punishment at her first trial: 16 years of imprisonment with manual labor.

Mikoshiba forcefully takes over the case from another lawyer. Yoko is curious about why he’s so fond of such a self-centered perpetrator, but Mikoshiba tells her nothing.
And right away, Mikoshiba has a face-to-face meeting with the defendant, where he realizes something. “Akiko Tsuda is hiding something...”

Laid off from her temp job, Yoko Kusakabe is now unemployed. She’s introduced to a clerical position through a public employment agency, so she arrives at the doorstep of a law firm for her interview. But when she arrives, she hears classical music coming from inside. And the office’s sign is cracked, too....

Yoko is shocked to know that ‘he’ was the guy which shook the entire nation by committing a deadly murder incident years back. Meanwhile, other around her furiously begin to investigate Mikoshiba’s background…

It gets disclosed to the public that Mikoshiba was the guy who had committed the murder incident when he was an adolescent. Meanwhile, Mikoshiba gets thrown in to a whirlwind of criticism and rage towards him…

The trial for the murder of the caretaker finally begins. While Mikoshiba tries to prove the innocence for the case, he encounters a new challenge he has never experienced…

While murder case associated with the nursing home heats up, questions are raised as to the reasoning behind the killing. Meanwhile, Reiji Mikoshiba realizes that the accused is hiding one shocking truth…

A particular woman comes to visit Reiji Mikoshiba’s office. It turn out to be his sister who he had not seen for 30 years since the murder incident…

The trial of the murder case finally begins, as Reiji Mikoshiba tries all-out to prove the innocence of one woman. Meanwhile, a wise prosecutor tries to cut in with striking new evidence…

After Reiji Mikoshiba disappears, Yoko tries everything to find him but with no luck at all. Meanwhile, the lawyer, Horai comes by to the office as he reveals a request given by Reiji himself about the main case…