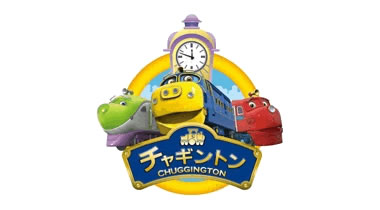 A story of young railway anthropomorphic locomotives living their daily life as they grow and develop, dedicated to the children of the 21st century. Ever since its premiere in England January of 2009, the show instantly gained popularity, establishing itself at the number 3 spot in the history of BBC kids television channel, “CBeebies’” viewer ratings. The smash hit “Chuggington” is already aired in over 165 countries and regions worldwide, with broadcasting on Fuji TV being its first ever terrestrial broadcasting.

“Chuggington” was created entirely by computer graphics as a children’s animation program. The story takes place in a town called Chuggington where various locomotives live. The name of the town comes from the onomatopoeia “Chug Chug” of the locomotives running on tracks. In this town, numerous locomotives reside, working together with humans. The main characters are Wilson, Koko, and Brewster, young locomotives who come to grow and develop together, deepening their relationship along the way. It’s a fun and heartwarming story that’s sure to create a stir among fans!